Two students who met while studying at Shrewsbury Colleges Group where they discovered they had both tragically had stillborn sons, have decided to take on a physical challenge to raise awareness and funds and bring the difficult conversation of stillbirth to light.

Kylie Brennan, 29 and Anna Fitch, 35, both from Shrewsbury, met last year when they started on the Access to Higher Education Course at the London Road Campus.

As they became friends, they discovered they had each given birth to stillborn sons. Kylie, already mum to Max who was aged 4, gave birth to Beau when he was just 20 weeks and 3 days old on 3 October, 2015. Anna, was mum to Ashton and Archie who were 8 and 5 when she lost son Hugo, at 38 weeks and 6 days on 12, February 2014. Kylie has since given birth to another son Dexter and Anna to son Louie. 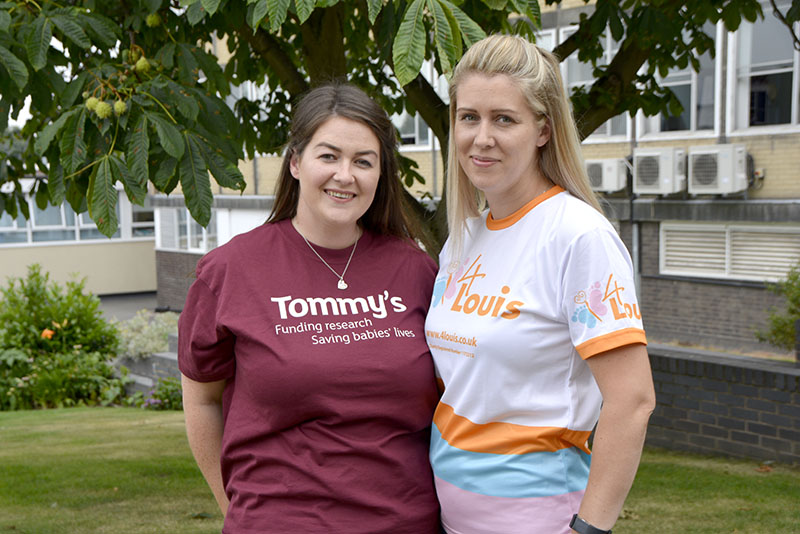 On 1 September, the two mums and a group of friends and family, will be tackling the summit of Snowdon, via the Miner’s Path and climbing 2372ft above sea level with a decent of eight miles in the challenge ‘Beau and Hugo do Snowdon.’ When they reach the top, they plan to shout their sons’ names from the highest mountain in Wales.

They have chosen to split the money raised between two national charities. Tommy’s funds research into stillbirth, premature birth and miscarriage, and provides information for parents-to-be and 4Louis, a UK charity, which supports anyone affected by miscarriage, stillbirth and the death of a baby or child. They hope to raise a total of £2000 and have already taken part in other fundraising activities including the Mad Jacks run at Attingham Park in November for 4Louis.

Kylie, who wants to become a midwife, said: “I had the idea of the challenge and messaged Anna and another fellow student, Lesley Whitfield, and we agreed to do it together. We put it on facebook and then lots of people wanted to join us and now there are 27 people joining us for the challenge, including Hugo’s dad, Chris Campbell and Paul, my partner. We can’t believe the response and how many people want to support us.

“Tommy’s have release a new campaign called ‘Together for Change’ and the ethos around it is making sure that people who have lost a baby, as well as those who haven’t, feel comfortable talking about it.

“I feel that people of our generation don’t find out about things which could help them in the immediate aftermath of something as tragic as we have suffered, such as donating breast milk, financial support, getting professional photographs of your baby and simply being able to talk about it and where to go for support. Awareness is changing though as even major UK soaps have covered it recently with their storylines – including Emmerdale, Coronation Street and Hollyoaks.”

Anna, who is studying towards becoming a nurse, said: “We feel it is important to talk about the fact we gave birth to and lost babies. What happened shouldn’t be defined by terminology, our sons died. As well as doing this physical challenge to help our grieving process and to raise funds and awareness, we also want to open the conversation surrounding stillbirth.

“It is a very isolating experience and understandably people don’t like to talk about it, or think they can broach the subject with you. We have both lost friends because people just haven’t felt able to talk to us or ask us if we are ok, which we really needed.

“I actually stayed in for six months after Hugo died because I didn’t want to deal with people’s sympathy or awkwardness. It’s tough for everyone around you as well as you yourself to deal with something like this.”

Kylie and Anna have involved their other children in the grieving process. Both have photos up of Hugo and Beau around their houses and they have talked about the sons they lost and what happened to them openly.

“My son Max said, ‘he just wasn’t strong enough was he mummy.’ I know he understands and we make sure that Beau is and always will be a part of our family,” said Kylie.

To support Kylie and Anna with their challenge, please visit their fundraising page at https://uk.virginmoneygiving.com/Team/BeauandHugodoSnowdon or their challenge facebook page at www.facebook.com/BeauAndHugoDoSnowdon