A former student helped defeat the Nazis at Bletchley Park

Aged 18, Betty Webb, was living in south Shropshire and studying a domestic science course at Radbrook College in Shrewsbury.

Betty, now 95, and living in Wythall near Birmingham/Worcestershire was born in Aston-on-Clun in 1923 and was home schooled through the National Education Union, which was developed to help families who lived or worked abroad. 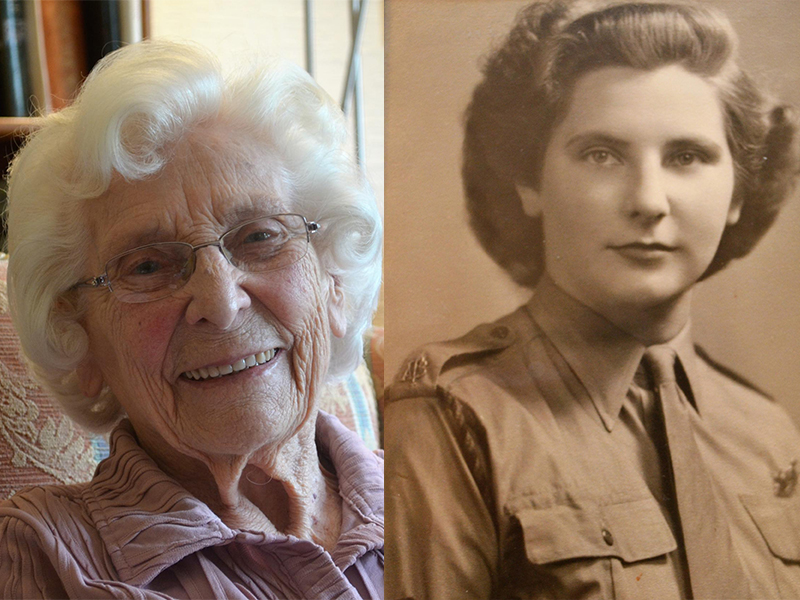 In her late teens, after taking an interest in domestic sciences, and not really sure what to do for a career, Betty enrolled at Radbrook College, which later became part of Shrewsbury College, where she was taught how to cook, run a house and do household accounts.

“It was a terrible winter and rationing was in full force so, so much food was restricted making the course somewhat difficult! I was there for two terms, during which time I managed to catch both measles and chicken pox. I enjoyed it, but the war had also broken out and by 1941 a few of us on the course felt like we really needed to do something more to be helpful, so I joined the Auxillary Territorial Service (Women’s Army) in May/June of 1941.

“We had basic training in the army at Wrexham and stated which trade we wanted to go into. I had put on my CV I was bilingual and could speak German and found myself being interviewed by an intelligence officer in London.”

From there she was ordered to take a train to Bletchley in Buckinghamshire, without being told why.

“I didn’t know what I was in for. The war was very much on in 1941 and there was a great deal of bombing in London. We all felt like we ought to be doing something more positive to defend the country. But it was a completely blind date,” she said.

Between 1941 and 1945 Betty was stationed at the Government Code & Cypher School’s codebreaking operation at Bletchley Park. At first she was put to work with Major Ralph Tester in the Mansion, where she registered undeciphered Enigma messages. Betty was involved in an intelligence triumph said by historians to have shortened the Second World War by between two and four years.

She then moved on to the Japanese Section in Block F to paraphrase deciphered Japanese messages. In 1945, this work lead Betty to see out the war in the Pacific at The Pentagon. By the end of her stint at Bletchley Park in 1945, Betty Webb had progressed from private to staff sergeant (Betty Webb).

“When I started at Bletchley we were departmentalised in such a strict way so we were not allowed to discuss anything with anyone and had to sign the Official Secrets Act, which was really robust. It was only from 1975 when the Secret’s Act was lifted years later, that we were finally allowed to talk about it all.”

Just two years ago, Betty learned from a researcher that those soon-to-be-decoded messages she had been ordered to catalogue – strings of letters and numbers that meant nothing to her at the time – had in fact been communications between the worst of the worst: members of the SS and the Gestapo, some of them discussing the beginnings of the Holocaust.

She said: “I was rather pleased to know I had been working on an important part of the exercise. I do hope I made a contribution.”

While working at Bletchley Park, Betty used to see the now renowned Nazi codebreaker, Alan Turing, whose work to crack an ‘unbreakable Nazi code’ was celebrated in the 2014 film The Imitation Game, starring Benedict Cumberbatch. She didn’t know what his work or role involved at the time but she still knows Alan’s nephew.

“After I went back home, my parents were living in Richard’s Castle on the Herefordshire/Shropshire border and I had a bit of a rest and then went onto an intensive secretarial/comms course, which stood me in good stead for a job and I started working at the Grammar School. I eventually went back into the TA and worked as an officer up and down the country at several units. I ended up in Birmingham working as a recruitment officer for the Women’s Royal Army Corp (what the now disbanded ATS became.)

Betty said that after the Secret’s Act was lifted, individuals started writing about their roles in the war effort and people were able to piece together what had gone on at Bletchley Park.

She has since written a book of her experiences called Secret Postings: Bletchley Park to the Pentagon, under her full name Charlotte Vine-Stevens and is still giving talks today about her experiences at Bletchley. She has done 150 so far and her book is available on Amazon.