A book bench remembering Shropshire-born poet, Wilfred Owen has been installed at Shrewsbury Library thanks to collaboration with Shrewsbury Colleges Group. 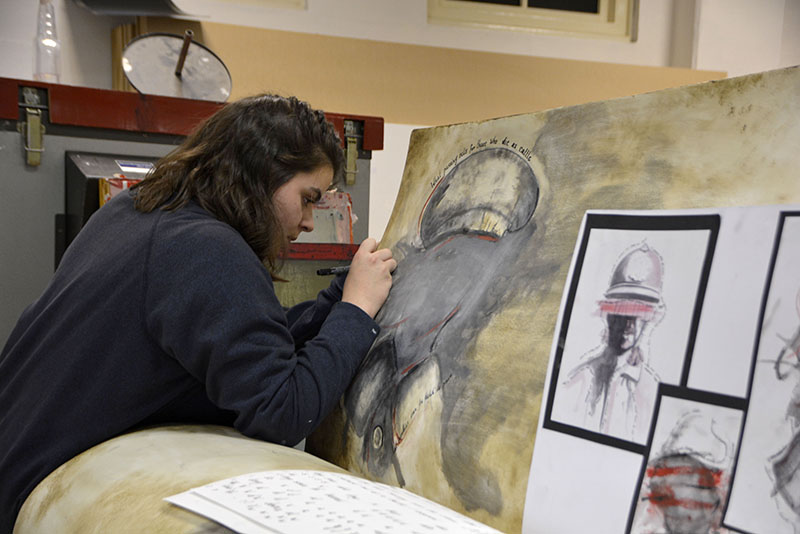 For the past four months, Level 3 Art & Design students have been working on an exciting project to commemorate famous WWI poet, Wilfred Owen. Shropshire Libraries contacted Shrewsbury Colleges Group, before the summer holidays, to discuss the 100th anniversary of Wilfred Owen’s death and the idea of a student-designed book bench. Owen actually studied at Shrewsbury Technical College, which is now SCG’s English Bridge Campus where all Art & Design courses are held. After 21 designs were submitted and a lot of deliberation, the work of Liv Goddard-Cockaday was chosen, which comes with a prize of £300.

Mirka Duxberry, Library Development Manager, said: “We chose to work with Shrewsbury Colleges Group because it was fitting to have a local artist and it is great to give Shropshire students a chance to expand their skills. We have to admit that we were taken-aback by the quality of the designs that the students presented us with. They were all brilliant and professional – which made our decision so difficult. After a long discussion, Liv’s design was decided on as we thought the concept tied in very nicely with Wilfred Owen’s writings and there was something quite magical about it.

“None of this would have been possible without the generous funding from Heritage Lottery and Poetry on Loan.”

After three weeks of hard-work from Liv, the bench was delivered to Shrewsbury Library for the unveiling on Monday. A letter Owen sent to his mother, The Send-Off and Dulce et Decorum Est (his most well-known poem) were read out before the bench was revealed in the library foyer. All the festivities were finished off with tea, coffee and cakes.

The bench was made to look like an old, weathered book covered in poppies. On each page was a faceless portrait – one of Wilfred Owen and one of an army medic – with snippets of Owen’s poetry floating around. The bench will take pride-of-place outside the doors of Shrewsbury Library, its permanent home.

Winning student Liv, 18, from Craven Arms, said: “I left the men faceless because war took away the humanities of soldiers and the poetry words are faded to represent the memories and minds drifting away. I chose to paint an army medic alongside Wilfred Owen because my Grandad was a medic in WWII and it meant a lot to me. I worked on the project over summer, but didn’t get to the final design until later on – I wanted it to be perfect.

“It was quite a surprise to find out that my design had been chosen. It is great having these opportunities at college – I’ve learnt so much since I’ve been here. I have always loved working with oils in portraiture and my skills within it have grown so much since being at SCG thanks to my teachers.”

Helen Morgan, Art & Design Curriculum Leader, commented: “It was a first for our students to generate their work from words, when they are usually inspired by images and to create a design that will be applied to a 3D object. However, it was a great challenge for them and they really enjoyed it. Liv has worked so hard on this project and even came into College over half-term to get the bench finished.”

To find out more about courses at Shrewsbury Colleges Group call 01743 342411, visit www.scg.ac.uk or come to an Advice Event January 17.