During a previous Ofsted inspection at Shrewsbury Colleges Group it was suggested, after witnessing the augmented reality learning used within the subjects, that they collaborate with the prison service to give individuals the skills they need to unlock their potential, gain employment and become assets to their communities. 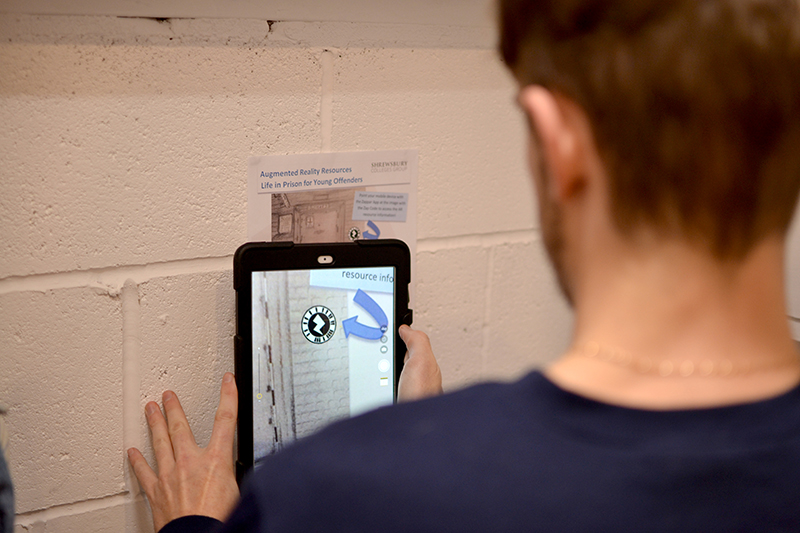 Richard Booth, ILT Coordinator, who develops and creates all the augmented reality learning at SCG, created a demo, presented it to the West Midlands Prison Managers and put forward a project brief to Erasmus+. All these stages were a success and the College was given €260,000 to use over three years in the UK and Europe.

There will be a range of different topics available in the augmented reality learning including: prison induction, prison safety, support & advice, employability skills, Maths & English and many more. At HMP Hewell, the trial location, young offender learners will have posters and learning cards in their cells that they can scan with an iPad to unlock the teachings they need. After the initial pilot, Shrewsbury Colleges Group will also be working with a Young Offenders Prison in Belgium and two in Romania.

Dame Sally Coates' report and recommendations following her review of education in prison, argued: "If education is the engine of social mobility, it is also the engine of prisoner rehabilitation. Greater progression must be encouraged. This builds autonomy through self-reliance, promotes rehabilitation by giving them control over some areas of their life, and prepares them for life on release."

A lot of research was done in prisons to develop this project - speaking to prisoners of all ages and officials to find out the best people and lessons to teach. It was decided to focus on Young Offenders prisons because of the mental health and suicide issues in these establishments. Suicide for boys aged 15-17 in prisons is 18 times more likely than for people their age in the community. Hopefully, with lessons on mental health and solutions right at their fingertips, these numbers can decrease.

Chris Pemberton, Shrewsbury Colleges Group Vice Principal and Quality & Curriculum Manager, said: “It is such a brilliant and interesting project that the College is involved in – so different than anything we have done before. It is great for us to be building our own case study on good practise for Ofsted, but the real achievement is working towards making a difference in Young Offenders prisons in the UK and Europe.

“Working with these establishments was the best option – not only to help with mental health, but also in the hope that working with prisoners at a young age will get them to change their ways and reform their lives.”

The project has four key partners, working alongside Shrewsbury Colleges Group to introduce, develop and roll-out the use of augmented reality to youth offenders. The methods developed are innovative for target groups and partner countries. Partners in the UK, Romania and Belgium, were chosen for their work within or close links with Prison systems, institutions, and local authorities. Project partners will adapt the language for the benefit of their respective countries and learner languages. This will include voice-over recording on the videos or subtitles and even resource specific changes to suit the needs of learners.