A former Shrewsbury Colleges Group A Level student is hitting all the right notes in the multiple award-winning musical, Hamilton.

Stephenson Ardern-Sodje, who completed his Film Studies, English Combined and Classical Civilisation A Levels at SCG in 2009, has been singing and rapping on the West End stage since 2017 as a member of the Hamilton cast. 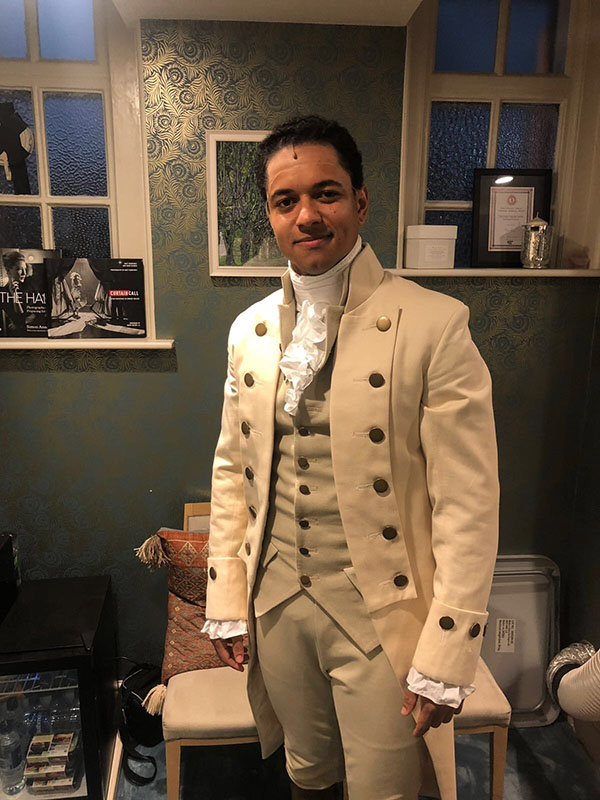 Hamilton is a musical about the life of Alexander Hamilton, one of the American Founding Fathers. The musical confronts important issues of today with an ethnically-conscious casting of non-white actors and a story told through a mixture of hip hop, R&B, pop, soul and traditional show tunes. It has achieved both critical acclaim and box office success, winning a plethora of awards in the process.

After gaining an English degree for Creative Writing from Brunel University, trying a few different jobs in Manchester and moving back to London for a television writing job, Stephenson saw an advert for a Hamilton open audition in June 2016 and decided to give it a go. The casting directors liked the audition, but were concerned at his lack of experience, so he went to the Royal Academy of Music to study an MA in Musical Theatre. He re-auditioned a year later and was given the part of Swing, where the performer covers multiple roles in the chorus – he even had the chance to play Alexander Hamilton in December.

Stephenson said: “My contract has been reissued until November 2019 and I’ve honestly never felt so professionally and personally fulfilled. There’s something so invigorating about finding a job that challenges you and plays to all your strengths. I’m beyond ecstatic to be staying on.”

For the foreseeable future Stephenson is very Hamilton focused; but he is currently writing a pilot episode of a TV show and working with another writer on the early stages of a musical.

Stephenson said of his time at college: “Studying A Levels in Shrewsbury was the obvious choice – I was academic at school and the College had a great reputation and location. I wasn’t sure what I wanted to do long term, but there were enough subjects on offer that I felt well equipped for anything. You had freedom and flexibility – you were trusted to attend lessons, utilise your free periods as you saw fit and manage your time. It prepared you for the next stage of life, whether that was a career or education.

“One year the College production was Les Mis and I played Javert. The production professionalism and level of responsibility each of us young performers were trusted with showed me how much I loved performing. They treated us like adults and trusted us to work independently, much like the real business does.

“There are a breadth of subjects and high quality teaching at SCG. I always felt challenged and supported in equal measure.”

Stephenson recently gave some of his time to do a webinar with SCG Drama and Theatre A Level students.