Former student's career researching the next generation of medicines 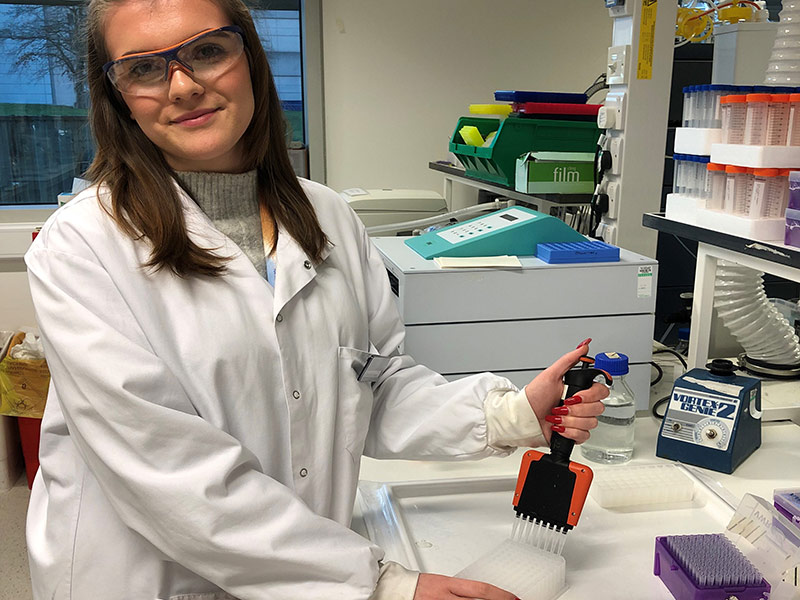 A former Shrewsbury Colleges Group student is paving the way for drugs of the future after scoring her dream job with GlaxoSmithKline (GSK).

Charlotte Parkes, 20, from Shrewsbury, knew she wanted to be a biochemist and research the next generation of medicines, but thought she would need a top degree from an elite university.

After studying A Levels at SCG, Charlotte was poised for a gap year while she contemplated what route to take, and stumbled across her ‘dream job’ on a website.

The role was to become an apprentice lab scientist for British multinational pharmaceutical company GSK. It was a way to help her change the world – and get a degree in the process.

Charlotte, who attended the Corbet School, said: “I spend my day testing samples that come in from the global research and development teams in Stevenage where I work.

“In recent months we have really focused our scientific energy on the immune system and genetics. My role involves analysing molecules and looking at how they behave – it is the science at the very early stage of drug discovery.

“I’m there to analyse data and it’s amazing to be at the start of possible life-changing cures. I say to friends that when one of the drugs I have worked on is used to help patients it will be the proudest day of my life.”

Charlotte says she loved science at school and was good at it, and imagined she would go to university. But despite doing better in her Maths, Chemistry and Biology A Levels than she thought, getting 3 Bs instead of the Cs she needed, she found the universities she wanted to go wanted even higher grades.

While deciding her next move, she literally found an advert for GSK offering higher apprenticeships with the opportunity to progress to a full degree level qualification – the outcome she is working towards is a BSc in Applied Bio-Science, the same as she would have got via university.

“I didn’t know about this route so I didn’t know it was an option. I applied but just forgot about it. A couple of months before I sat my A Levels, I was asked to do psychometric tests and then went for an interview. It was afterwards that I knew it was absolutely what I wanted.

“I was studying in the library one day with friends when GSK called to offer me the job. I couldn’t quite believe it.

“I needed three Cs to start, but got three Bs. I loved College, it was the best time of my life. I really had to organise myself and I loved it. It definitely prepared me for this role. I really loved my A Levels, even though I chose three pretty heavy subjects. I knew that to get where I wanted to go I would have to put the work in, and I did.

“I feel very lucky. You normally have to get a degree and then start looking for research jobs. I started a year ago. There are more than 350 apprentices at GSK worldwide plus graduate trainees and people on industry placements.

“There are also some of the most amazing intelligent people with PhDs and we are all working together. My studies are all done online and I get time in the working week to do assignments.

“I now live with one friend. I have had to grow up more quickly than I would at university but I’ve enjoyed that. Knowing in four years I will have a degree, proper experience, a job and with no debt, is fantastic. My dream has come true.”
With students racking up debts on average of £50,000, and the fact there is no guarantee of a decent job once you graduate, it’s no wonder more and more savvy learners are finding clever ways to study for a degree debt-free, just like Charlotte did.