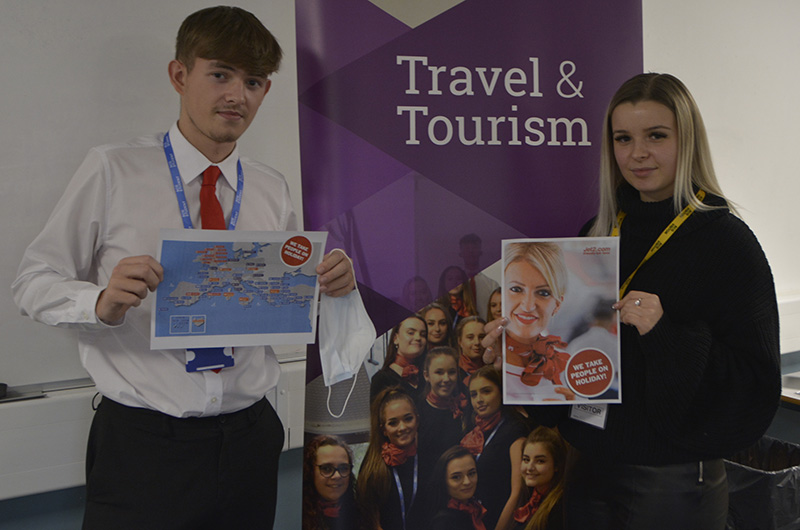 Two Shrewsbury Colleges Group students have secured highly sought-after positions at Jet2, fulfilling a life-long dream to get paid to travel the world.

Air cabin crew is a highly competitive profession, with the chance to travel the world every week being a dream career for many people.

These jobs are so difficult to secure that even SCG’s Travel & Tourism students – whose course is designed to prepare them for roles that combine working internationally with customer service skills – have historically needed to wait until a few years after leaving college to get these positions. Yet, this year, two of our students have defied expectations and won cabin crew jobs straight out of college.

Megan Woodger, 18, completed her Level 3 Diploma in Travel & Tourism in July 2021 and is set to become a member of Jet2’s cabin crew in January, while Jay Northwood, 17, who is still studying at SCG and will finish his course early next year, will be joining her in March.

Jane Owen, Travel & Tourism teacher, emphasised just how unusual these circumstances are, explaining that: “Cabin crew is really competitive, so it is very rare. Megan was the first student I’ve ever had leave and go straight into cabin crew, then, within a week, Jay was offered a job too. It shows the calibre of people they are.”

Both Megan and Jay were stunned to get these coveted roles. “I obviously applied anyway, but it was not expected at all,” said Megan. She visited SCG last week to speak to current students about her remarkable success, only for one of those current students, Jay, to get offered a job with Jet2 the night before her visit.

Jay was by far the youngest person at the assessment day he attended, with everyone else appearing to be at least in their early twenties. In fact, Jet2 was the only airline that he could apply to as a 17-year-old, which underlines how much of an accomplishment it is for him to have received a job offer at all.

Megan and Jay were ecstatic when talking together about their new jobs. “I’ve literally wanted to do it since I was six,” said Jay. Megan agreed that it was a life-long dream come true for her too: “It’s what I’ve always wanted to do.” The fact that they get to work their dream job while still being teenagers felt surreal to them both, with Jay saying: “We’re so young. I’m so proud we get to do this.”

Their roles at Jet2 will require them to travel all over Europe to over 70 locations, from Reykjavik to Santorini. By this time next year, they will be seasoned travellers and most likely have visited every corner of the continent.

However, Megan and Jay were equally excited about the customer service aspect of cabin crew. Jay elaborated: “I’m most looking forward to being on the plane. I love flying. I love meeting new people.” The Travel & Tourism course they studied is centred around giving students the advanced hospitality skills they need to succeed in careers like air cabin crew, so it is not surprising that they feel most drawn to that part of the role.

They additionally mentioned how useful the industry-specific knowledge they were taught at college was in making their applications, as it ensured that they were highly informed about different airlines and had realistic expectations of what their duties would involve.

Megan and Jay have been outstanding students and Jane attributed their success in their careers to dedication to their course: “Ultimately, they’ve really worked hard on their Travel & Tourism course and really grabbed every opportunity we gave them. We’re very proud of their skills and qualities, and we’re looking forward to keeping in touch with them and finding out what they’re doing in their careers.”