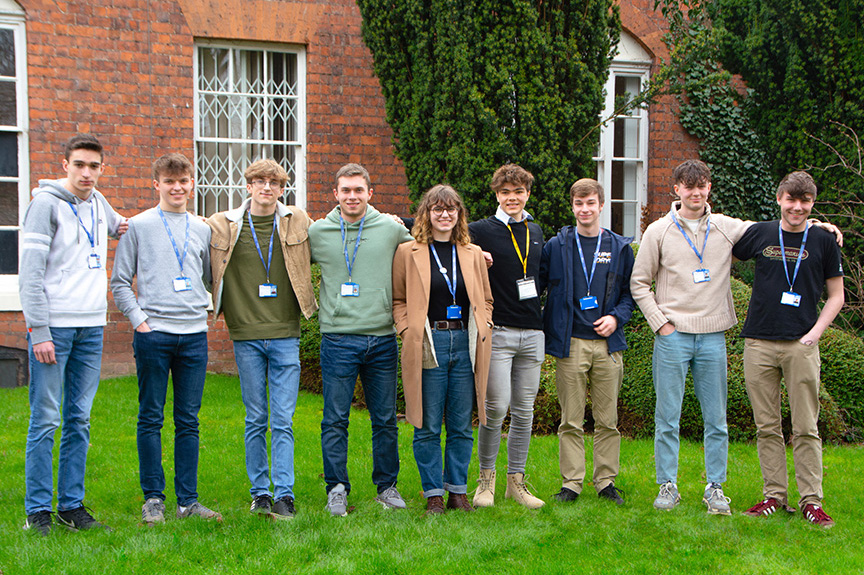 Ten SCG students from across the county have been offered places to study at Oxford and Cambridge universities.

Following months of fine-tuning their personal statements, attendance at specialist extension and preparation classes, and mock interviews, the students have recently received the exciting news that they have been successful in their applications. All ten students have done phenomenally well to be offered places by the elite universities as they have seen a record number of applications this year.

The successful students will be studying a wide variety of arts and science courses ranging from Medicine to Law to Classics. To celebrate their remarkable success, the offer holders were invited to a lunch with the Principal, James Staniforth, so he could congratulate them in person and wish them the best of luck in their upcoming A Level exams.

At the lunch, the students all thanked their A Level teachers, as well as Careers & Progression Advisor Paul Kelly (who runs the Oxbridge and Competitive Universities Society), for providing crucial guidance and support throughout the application process.

James Staniforth said: “Well done to each of the ten students who have been offered well-deserved places at Oxford and Cambridge universities and thank you to all the staff who have supported them. All ten students have made excellent progress during their time at college; I am delighted that Shrewsbury Colleges Group has helped them build the exceptional skills, knowledge and experience that are essential to securing a place at Oxford or Cambridge.”

“I am really pleased that the students will be studying such a range of subjects at university, across both arts and science disciplines, as this reflects how valuable it has been to provide our students with a broad choice of A Level courses.”

The students who have been offered places are:

Emily has received an offer to study Music at Magdalen College, Oxford. Her offer is an especially impressive accomplishment since she is taught A Level Maths via distance learning, adding an extra challenge to her studies.

Emily has really engaged in her A Level Music course and she spoke enthusiastically about the opportunities it has opened up for her: “I’ve always been passionate about music and being a student at Shrewsbury Colleges Group has provided fantastic performance opportunities at Shrewsbury Abbey and St Chad’s. It’s an amazing department!”

“I know I wouldn’t have believed in myself enough to apply to Oxford without the incredible support of my A Level Music teacher, Chris Lewis. Chris has always gone above and beyond, constantly encouraging me to be the best I can be whilst offering unfaltering support and guidance.”

Reuben’s story is unique among this year’s Oxbridge offer holders since he is actually a former SCG student, having finished his A Levels last June.

He explained: “My story is a bit atypical because last year I had a change of heart regarding career plans. I could say that I chose to follow my heart (and my ever-growing passion for languages) rather than my head.”

“I found myself forced to take a gap year before applying to study languages (Oxford being only a distant aspiration), but I must say that I was immensely impressed with the help and support available at college for ex-students such as myself.”

Reuben has an offer to study French & Greek at St. Peter’s College, Oxford. He said, “A dream of mine is to live and work abroad, perhaps teaching English in a foreign university.”

Oliver is one of two SCG students who have been offered a place to study Natural Sciences at Cambridge. He will be studying the course at Girton College, where he’s particularly excited about getting the opportunity to be introduced to ground-breaking research. “My ambitions have always been in research and the cutting edge of science, which I will have access to at Cambridge,” he said.

Like the rest of the Oxbridge offer holders, Oliver worked extensively on his application. He told us: “I think the main things that helped me get an offer were my personal statement and interview, which wouldn't have been nearly as effective without the college's assistance.”

“I found it very easy to request help from multiple staff members with writing my personal statement and editing it, for example, Paul Kelly and the Principal, James Staniforth. On top of that, my Biology teacher, David Rugman, would constantly nudge me to get practice interviews underway, as well as organising some himself.”

Sam had a slightly unusual path to achieving his offer from Oxford, where he will be studying Mathematics at Jesus College.

Sam was originally studying at Idsall Sixth Form for the first year of his A Levels. He ran into an obstacle when he was told on GCSE results day that Idsall wouldn’t be running A Level Further Maths. Showing a remarkable amount of initiative, Sam decided to teach himself the course (with support from his teachers). He used lockdown to go through the AS content for Maths, which allowed him to take his A Level Maths exams a year early.

After achieving an A* in his A Level Maths, he decided to move sixth forms. “I decided that I needed to have some further mathematicians around me, to share my ideas and improve from my peers,” Sam said. “After contacting Shrewsbury Colleges Group and speaking to Head of Maths Chris Luther (who is now my current Maths teacher), he said it would be possible to transfer, despite the exam board being a different specification.”

“I would recommend the college to anyone, as it has helped me develop the independence and time management skills crucial to university. I am really looking forward to studying Maths next year at Oxford, fingers crossed that I’ll get the grades that I need.”

Finn has been offered a place on Oxford’s famous PPE (Philosophy, Politics and Economics) course at Hertford College. The alumni of Finn’s degree course include dozens of important figures in government (including three former British Prime Ministers), and he has ambitions to work for the Civil Service himself.

“I am very excited to have got an offer for Oxford, especially as it is for my preferred college, Hertford,” Finn said. “I was given loads of extra support, including separate interviews for each branch of PPE, detailed feedback on essays for the admissions test and thorough advice about my personal statement. Also, the weekly Oxbridge extension sessions were great preparation in terms of thinking skills for the interviews.”

“Although I don't actually do any of the subjects within PPE at A Level, the college teaching has ensured that I am well equipped to succeed in the degree. Overall, the college helped me massively with my application, for which I am very grateful.”

George is the second of this year’s applicants who will be studying Natural Sciences at Cambridge and he will be based at Pembroke College. Like Oliver, George’s interests and ambitions lie within the field of research: “I love learning about science and, providing I have the ability to do so, I picture myself staying within the field of science, in academia and/or research.”

George was incredibly grateful to his teachers for the academic support he’d received. “All my teachers have helped me succeed at A Level to make sure I am on track for A*s and As,” he said. “I also received brilliant support and guidance on my application from Paul Kelly, in addition to a mock interview organised by the college, which was invaluable in preparation for the real thing.”

Connor has travelled the furthest to study at SCG, having previously been a student at The Maelor School near Wrexham.

The chance to study A Level Law led to Connor being offered a place to study the subject at Gonville and Caius College, Cambridge. He said: “In terms of inspiration, studying law at A Level really made me interested in a deeper study at degree level. My law teacher, Amelia Hodson, was really supportive in both my studies and application.”

Connor also had a lot of praise for the help he’d received from Paul Kelly: “He really knew what he was talking about in relation to a Cambridge-specific application and I think gave really helpful and constructive advice.”

Adam has been offered a place to study Engineering at University College, Oxford’s oldest college. Adam has exciting ambitions within engineering, hoping to work in the motorsports industry. “I mostly got into engineering through always being interested in maths and then later the sciences in secondary school,” he said. “It wasn’t until becoming a fan of Formula 1 that I realised engineering was a possible career path for me. Hopefully, if all goes to plan, I’d like to get a job related to F1 in the future.”

As to why he chose Oxford, Adam said: “Obviously I’ve known for a long time that it’s a top university, but I also needed to make sure it was the right place for me. I like the small teaching group style and the place itself seems very nice.”

One of the main things that Adam felt helped his application was a scholarship for a Concord College University Preparation Programme that he completed during the summer, which he secured through SCG's partnership with Concord College.

Amelia has excelled on her A Level Classical Civilisation course and has been offered a place to study Classics at Cambridge. She will be attending Newnham College, whose faculty includes a famous classicist from Shrewsbury, Mary Beard.

While at college, she has made thorough use of the resources available to support her in applying to Cambridge. “I took part in the Oxbridge society, which helped guide me towards resources and programmes that enriched my application,” she said. “I was also lucky enough to receive support from the Principal with my personal statement and preparation for the interviews.”

After university, Amelia plans to train as a lawyer.

Travis has secured an offer from St John’s College, Oxford to study Medicine. He has been very proactive in preparing to apply for medical degree courses, getting involved in extracurricular activities from the moment he began studying his A Levels. “Upon arriving in first year, I joined MedSoc, which forwarded links regularly to enrichment opportunities and provided a platform for all the students hoping to study medicine to converse about the application progress,” he explained.

“I participated in a virtual work experience which covered many specialties within medicine and gave me the chance to talk with doctors about their experiences. I also work in a medical centre. This gave me a better understanding of the cogs and wheels behind NHS primary care.”

Travis is not just looking forward to his studies at Oxford, but is also excited for the student experience: “I think Oxford will be a great place to live. St John's College has really nice facilities, such as free gyms and expansive gardens. I am excited to meet lots of new people with similar interests to me and begin the next chapter of my life.”