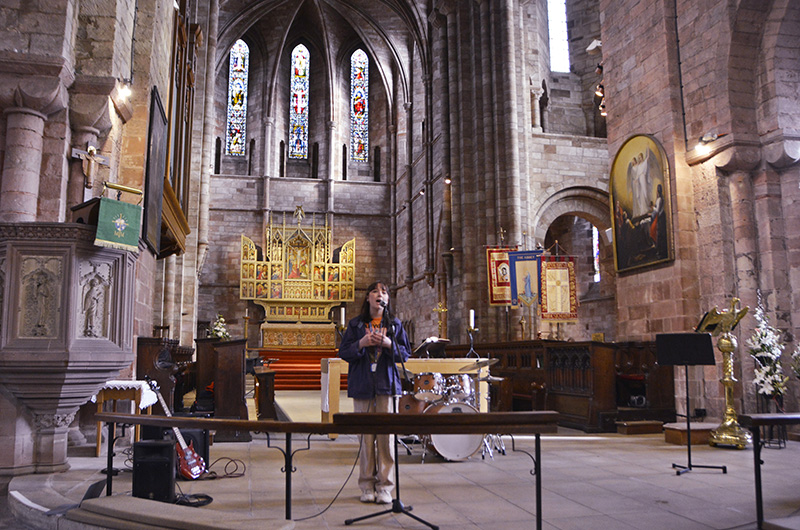 This academic year, SCG’s A Level Music department began an exciting collaboration with Shrewsbury Abbey, giving students the opportunity to perform in a spectacular venue.

The A Level students have performed in the Abbey on a few different occasions this year, most recently in a lunchtime recital that took place before half-term.

Playing in front of live audiences in the Abbey has meant a great deal to these musicians who have had limited chances to perform live in the past due to COVID restrictions. The February recital was an especially significant experience for the students because they were preparing for a visiting examiner to watch them perform at college in March.

Oliver Mannering opened the recital by playing a piece by Tchaikovsky on the piano. The recital was Oliver’s first experience of ever performing for a live audience, making it incredibly impressive that he chose to play from memory.

The recital included two other solo instrumentalists: Theo Bumpus on the trombone and Leonie Collins on the piano, both of whom gave excellent performances.

Theo said: “It was wonderful to be able to perform in the historic setting of the Abbey. The fantastic acoustics and opportunity to perform to a live audience were very helpful for my A Level Music course. I was quite nervous about performing to a crowd. However, it was very helpful to be able to tackle these nerves ahead of performing to an A Level examiner in March.”

There were also two singers performing as part of the recital, Daisy Page and Ellie Young, who, by coincidence, both chose to perform songs from the musical Waitress (which previous A Level Music students saw on the department’s last trip to New York City in 2019).

The final performance of the day was by a jazz quartet, which consisted of A Level Music student Jacob Preater on the drums, alongside three A Level students who are involved in music as an extracurricular activity: Leo Needham, Louis Meehan and Jonah Scott on the bass guitar, saxophone and piano.

Nigel Pursey, Shrewsbury Abbey’s organ master and PCC representative, expressed how grateful the Abbey staff are to have collaborated with these talented students. “This has been a new collaboration this academic year, but one that is already proving to be a great success,” he said. “There have so far been two very varied lunchtime concerts, each featuring a number of talented students, and both have been fantastic.”

He continued: “The Abbey is a great space for performing arts, is so convenient for Shrewsbury Colleges Group students and has huge potential for practice and performance. The Abbey has, of course, been a centre for worship, pilgrimage and music for over a thousand years, and we are delighted to see your students continuing this tradition. I do hope this new collaboration can continue and develop.”

You can watch the jazz quartet perform at the February recital below.