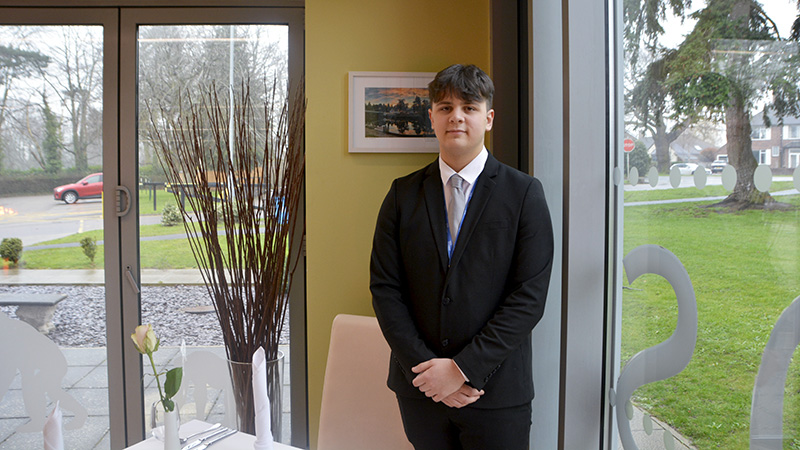 Mark Lopez, 18, and Amelia Brewis, 17, are the latest SCG Hospitality & Catering students to find work in top establishments, securing jobs at a four-star hotel and a Michelin Plate restaurant respectively.

Mark (pictured above) is a Level 3 Supervision & Beverage Services student, and he has recently accepted a job as trainee manager of the Prince Rupert Hotel.

“I approached the owner asking if they had any jobs available,” Mark explained. “It’s a nice, four-star hotel and they have a restaurant with an AA Rosette Award, so I thought I’d give it a chance.”

Mark was invited for an interview, where the hotel owner offered him the trainee manager role due to the high quality of the course he is studying at college.

“I was shocked when it happened, but this course seems to get me to better places than I expected it would,” Mark said. “The owner was really impressed by the things we do, like flambéing at the table, carving bread and silver serving.”

SCG’s Hospitality & Catering courses are designed to allow room for students to work professionally in the industry while studying. Mark plans to work four or five shifts a week until he finishes his course, after which he will immediately go into full-time work at the hotel.

His new role will allow him the chance to experience everything from reception to housekeeping to bartending. “It will be really good experience for the future,” Mark said. “Eventually, I want to work abroad. The hotel owner has a son who is the manager of a five-star hotel in London and another son who works at a hotel in the Caribbean, so hopefully I’ll get some good contacts.”

Meanwhile, Amelia, who is studying a Level 2 Diploma in Hospitality, has secured a job at The Walrus, the only restaurant in Shrewsbury in the Michelin Guide.

Amelia was previously working for a restaurant chain. She was offered the job at The Walrus after a friend recommended her to the restaurant’s management, with the combined strength of her previous experience in the industry and her training at college making her an excellent candidate.

She has found that a lot is expected of her as a waitress at such an acclaimed restaurant, but she has risen to the challenge, and she even hopes to take on the extra responsibility of learning bar work.

“One of the most important things is to know a lot about the food we’re serving,” she explained. “We have to explain the menu when the customers sit down and need to be ready to answer any questions about where the ingredients come from and what the cooking process is. That’s the hardest bit: trying to remember all the food since it’s quite fancy stuff.”

Like Mark, Amelia also has big aspirations in the hospitality industry and plans to work internationally, specifically in Australia as she has family from there. “I’d like to work in hotels in this country until I’m 20 or 21 and then go and work in hotels abroad,” she said. She is hopeful that having a Michelin Plate restaurant on her CV will help her get there.