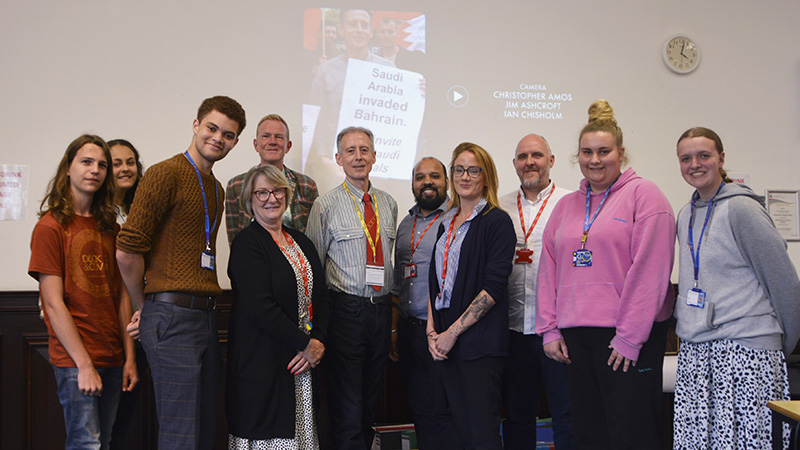 Shrewsbury Colleges Group has been incredibly lucky to have celebrated Pride Month this year with a series of fascinating and inspiring talks from human rights campaigner Peter Tatchell, asexual rights activist Yasmin Benoit, and an expert in Shropshire’s lesbian and gay history.

Megan, a member of SCG’s student Pride Group, explained why celebrating Pride Month in college is important to her: “I believe that these activities and events have helped to create an inclusive environment for students where they can feel included and supported during their time at college. I have become more confident in myself in my time at college and part of that is due to the acceptance I feel here.” 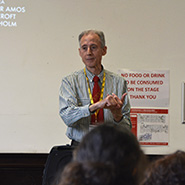 On Thursday 9 June, the college showed a documentary about human rights campaigner Peter Tatchell to students and staff at Welsh Bridge Campus. After the documentary, there was a Q&A with Peter himself, where the audience had the opportunity to talk with him about activism and LGBTQ+ rights.

Peter has been campaigning for LGBTQ+ rights (and many other causes) since he was 17. He encouraged the young people in the room to support the causes that they are passionate about, and he emphasised that anyone can change the world if they put their mind to it, regardless of their age.

“I want to leave the world a better place than when I came into it,” he said. “The future is down to us. We make the future.” 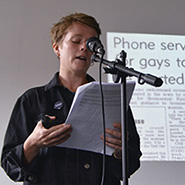 Daisy Haywood also visited the college on 9 June to talk about the research she has done with Peter Roscoe (who organises Shropshire LGBT History Month) into the Shropshire Lesbian and Gay Switchboard.

In the 70s, Peter was a volunteer with the switchboard, a phone service which ran from 1977 to 2002 and provided help, advice and information for the local LGBT community.

“This is a really essential part of LGBT history for our local community,” Daisy said. “We’re at risk of losing a lot of these stories, and we’ve lost a lot of them already through all those years of prejudice.”

Daisy encouraged the students in the audience to speak to older people, not only to preserve local history, but also to learn from the past. She has learnt that most people phoned the switchboard because they felt isolated, which she thinks is still a huge issue for many young LGBTQ+ people in Shropshire today. 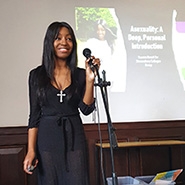 Our final visitor for Pride Month was award-winning asexual activist Yasmin Benoit, who gave a presentation about asexuality on Tuesday 19 June.

Yasmin discussed her personal journey from realising that she did not experience sexual or romantic attraction towards anyone to deciding to come out and fight for asexual people to be more visible in society.

Willow, an asexual student who attended Yasmin’s talk, said: “As an Aro-Ace (aromantic and asexual) person myself, it felt so nice for the college to recognise my orientation and to bring in a speaker to shed light on a subject that not many people know much about.”

You can find out more information about Yasmin’s talk here.

For anyone who was unable to attend Yasmin’s talk due to exams, she has very kindly recorded a video message for all SCG students, which you can watch below.

Every year SCG staff and students celebrate Pride Month in a number of ways which you can find out about on our Pride webpage.