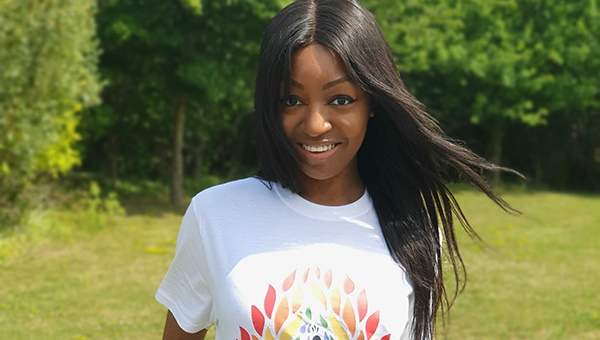 Shrewsbury Colleges Group was very lucky to have award-winning asexual activist Yasmin Benoit as a guest speaker for Pride Month.

Shrewsbury Colleges Group was fortunate to have activist Yasmin Benoit as a guest speaker for Pride Month. Yasmin visited the college on Tuesday 21 June and shared her personal journey from realising she was asexual and aromantic in her childhood to coming out at aged 20.

In her very informative presentation to college staff and students, Yasmin defined asexuality as experiencing a lack of sexual attraction towards any person regardless of gender. The other aspect of her identity that she discussed was being aromantic, which means that she has no desire to have romantic relationships.

At 18, Yasmin began modelling with the goal of diversifying the fashion industry, and she became one of the UK's most prominent black models working in alternative fashion. She came out as asexual hoping to empower aromantic and asexual people, bring those identities into the mainstream, fight for their social and legal inclusion, and dispel misconceptions about them.

Since then, Yasmin has been at the forefront of raising awareness of asexuality in the UK. She has recently started working with Stonewall (the largest LGBTQ+ rights organisation in Europe) on the UK’s first asexual rights initiative, which aims to produce a report on the issue of asexual discrimination in the workplace, healthcare and education.

Asexuality is an important focus for Shrewsbury Colleges Group as 4% of our student respondents in a survey conducted earlier this year identified as asexual. This compares to an estimated 1% of the population as a whole.

Alongside discussing her personal experiences, Yasmin also explained how asexuality is a spectrum and introduced the Split-Attraction Model, which states that romantic and sexual attraction are separate identities that don't necessarily align.

After wrapping up with some empowering messages, Yasmin met with a few students individually so that they could discuss their experiences of being asexual with her.

One of these students, Willow, explained why the visit was so important for her: "As an Aro-Ace (aromantic and asexual) person myself, it felt so nice for the college to recognise my orientation and to bring in a speaker to shed light on a subject that not many people know much about.”

Willow continued: “Yasmin's presentation was both informative and personal, which I think made people more interested in the topic as it came from the heart. I spoke with her after her presentation, and she was so lovely. I'm going to be keeping up to date on the research she is conducting with Stonewall about asexual people in areas like healthcare and education.”

For more information on what SCG did to celebrate Pride Month, visit our Pride Month webpage.