Music Technology students hit all the right notes with The Charlatans

Music Technology students at Shrewsbury Colleges Group were rewarded for their efforts at their annual awards ceremony last week - with one scooping the main accolade, named after former Charlatans’ drummer, the late Jon Brookes.

The Jon Brookes Award for Endeavour was established after Mr Brookes, former drummer with world-renowned British Indie band The Charlatans, became affiliated with the College when he helped to launch its Roland Academy for Music in 2009. 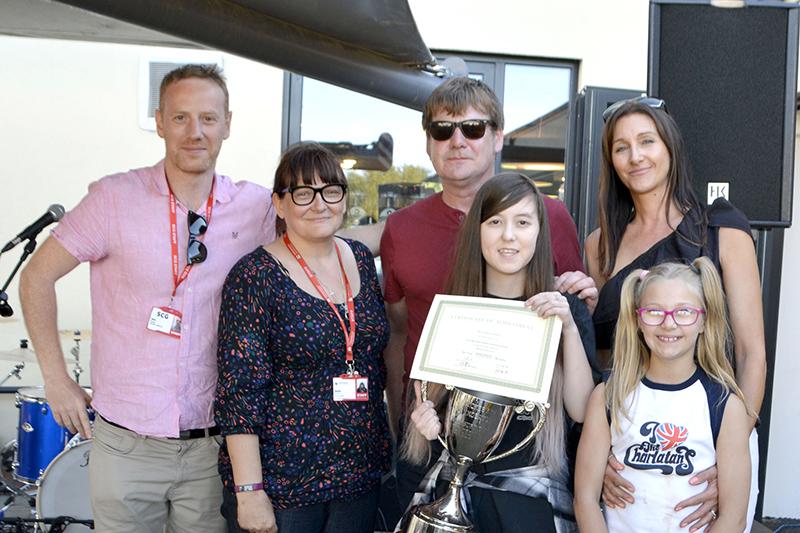 Over the years he held student workshops focused on both drumming and working in the music industry as a whole, which included impressive personal demonstrations as well as giving students the opportunity to play alongside him to famous tracks by his band.

In late 2013, Jon passed away from a brain tumour – but his legacy through the College lives on. The Charlatans bass guitarist, Martin Blunt, returned for another year to present the trophy to Music Technology student, April Preece, 17 from Shrewsbury. Deborah Hill-Brookes, Jon’s wife and his daughter, Coco Brookes, were also there to pass on their congratulations and continue his legacy with the College.

Martin said: “This is an excellent event – congratulations to April and I wish her the best of luck for her future in music. It is a pleasure to be asked to present this award and get the chance to meet some inspiring students. Jon enjoyed being part of Shrewsbury Colleges Group and helping the students learn about music and production. It is great to see the student’s hard work continue to be celebrated with this award named after him and it’s always a pleasure for me to come to the College and see this important collaboration continuing.”

Other awards and prizes were handed out to students who had worked hard during the academic year and a variety of music students performed to friends and family throughout the evening.

Music Technology teacher, Beth McGown, who introduced Mr Brookes to the College, said: “This is a great way to celebrate all that the students have achieved this year. We really appreciate Martin, Debbie and Coco making time to come to the College to meet the students and talk to them about the industry.

“April was selected as the most outstanding student because despite coming up against some difficulties at the beginning of the year and suffering some confidence issues, with hard work and determination she has excelled and become a brilliant Music Technology student and achieved some of the highest grades.”