A record number of students graduated yesterday (Friday 13) from Shrewsbury Colleges Group, when they collected a range of degree-level awards in a prestigious ceremony at St Chad’s Church in Shrewsbury.

Led by the Mayor of Shrewsbury, Councillor Peter Nutting, a line of 105 mortar boards and graduation gowns made its way from Shrewsbury Market Square to St Chad’s Church in the annual Shrewsbury College graduation parade.

The College has been teaching higher education for over 20 years and numbers are steadily increasing with 265 students graduating overall this year and 105 collecting awards as part of the ceremony. 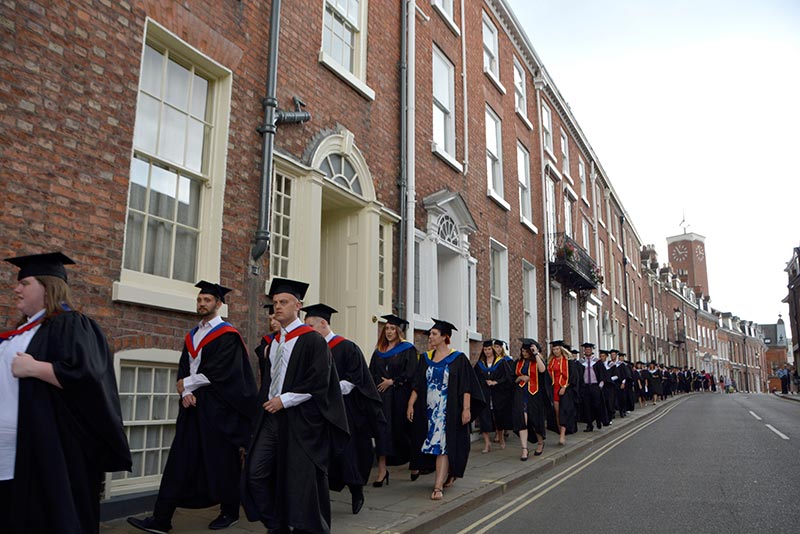 Students from the Graduation Parade/Ceremony

Vice Principal Chris Pemberton was the Master of Ceremonies at the event and welcomed the ceremonial procession and audience, made up of family and specially invited VIPS. Principal of Shrewsbury Colleges Group James Staniforth gave a formal address followed by a speech from the special guest speaker, James Holt, Senior Communications Offi¬cer for the Households of The Duke and Duchess of Cambridge and The Duke and Duchess of Sussex.

Addressing the graduating students, Principal, James Staniforth, said: “You have gained qualifications in a range of areas that are really important to our local economy and important to developing Shrewsbury and Shropshire into a fantastic place to work. But you’ve also displayed the behaviours employers are looking for, like resilience and confidence.

“When I think of the work you have done and the journey you have been on to ready you for the next stage of your life, I can see you have displayed all these behaviours. You are really well informed and you are better employees as you enter the employment market, ready to make an important contribution and you can take confidence in that to go onto even greater success in the future. And when you do, think back fondly to your time with us. Congratulations to you all, we are extremely proud of you.”

James Holt, 36, originally from Shrewsbury, was invited to speak at the ceremony as a former student of the College, having studied, English, Politics and Spanish A Levels in 1998. He then went onto university to study Journalism and started working for the Midlands News Association at the Shrewsbury Chronicle as a reporter in 2004 during which time he was one of only a few British journalists to be able to travel to Basra, Iraq to cover the war efforts. He won a national award for his reporting and then moved to Severn Radio as news anchor.

This year, James started a new role as a media adviser at Kensington Palace, working with The Duke and Duchess of Cambridge and the new Duke and Duchess of Sussex. He was instrumental in the coverage of the recent royal wedding and was in attendance as a guest at St George’s Chapel at Windsor Castle.

He said: “I genuinely don’t know where I got my love of politics and journalism from. But it was supercharged and defined here at College in Shrewsbury.

“I’d been at school at Mary Webb in Pontesbury, and then came to college where people from all over the county came together. All with different experiences and ambitions. I got my first real taste of the vibrancy of what people can do and have to offer. I fell in love with politics, and debate, and argument, and learning.

“I was never academic in the purest sense, but I love learning from experience and from other people. And for many of you, today is the beginning - as it’s outside the classroom where you can really excel.”

As part of the ceremony, student Adam Mazan, 21, from Market Drayton, was awarded the annual HE Student of the Year Award by Governor Michal Wilmot before the Chair of Governors Gordon Channon, thanked everyone for coming and taking part and the event closed.

Mark Follows, Media Teacher, said “I was Adam’s course tutor from Year 2 on his Level 3 Media course through to his HND in Game Design and Production, so I have spent a lot of time with him supporting his progression and ensuring he produced the work he is capable of. He started with us on a Level 2 IT course and worked his way up to the degree-level HND he is graduating from today. He worked with graphics, concept art, game design, 3D modelling and animation and really enjoyed his time here.

“Everyone who has worked with him or known him as a student has enjoyed his company and his dry sense of humour, his accomplishments come from his determination to do the best he can. It has been great to work with Adam and we all hope he does well in whatever direction he goes in.

Helen Fellows, HE Lead at the College said: “We have been running higher education courses at the College for over 20 years now offering local, high quality, affordable courses.

“As well as offering a full BA Hons degree in Education, we are offering 13 degree level courses in the next academic year, across subjects including Photography, Counselling, Computer Science, Engineering and Sports.

“There are many benefits of studying higher education with us, including smaller class sizes, taught by tutors with industry experience who have the opportunity to influence the development of programmes, excellent facilities and the ability to study around work and family commitments.”

To find out more about Higher Education courses at Shrewsbury College, come to the next Advice Event, on 30 August or 4 September from 5-7pm at London Road, call 01743 342342 or visit www.scg.ac.uk/higher-education