Shrewsbury Colleges Group is celebrating after being accepted as a Focus College via the Rugby Football Union – meaning it can expand its rugby-focussed qualifications and provide a better future for anyone wishing to work in the field of rugby or sport.

After an intensive application process, the College found out it was one of just 12 colleges nationwide out of 36 which applied, to be chosen to become a RFU/England Rugby supported programme.The nearest College to receive the status is Dudley. To be successful, Shrewsbury Colleges Group had to prove it had the infrastructure to help sustain the game in the future and it will receive funding over the next three years to allow it to do this. 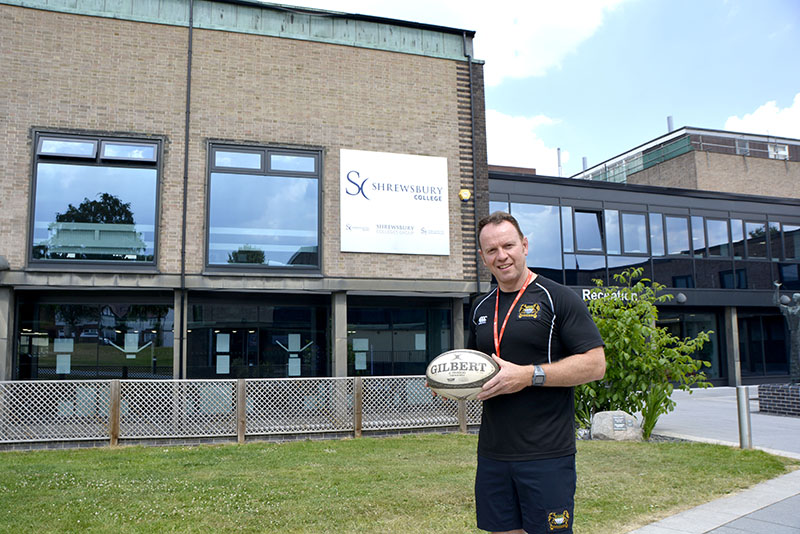 This September, the Level 3 Rugby & Education Programme, a vocational course based at London Road Campus, will start for the first time. Applications are already high, but the new status means that learners on the course will receive new, additional qualifications.

Sports Teacher and Rugby Coach, Dale Smallman, said: “Students taking the full-time course will also be able to get coaching, officiating and strength conditioning qualifications. With these qualifications, the students will then do extended work placements in rugby clubs and schools to help grow and sustain the game and we will attract high profile centres to allow the students to do this.

“The status has really enhanced our qualifications and the opportunities and prospects that learners can take from the course. They could go on to be rugby or sports coaches, work in strength conditioning or become a PE teacher. We run a Foundation Degree in Sports Coaching and Physical Education with our partners Staffordshire University, and the students from this course can go on to that and then top up to a full degree.

“On Wednesdays, students across the group, plays fixtures as part of the West Midlands Rugby League 2, which includes clubs such as Cirencester, Loughborough, Hereford, Hartpury in Gloucester and Newcastle-Under-Lyme- it’s a really well organised, high profile league with some great teams.”

In addition, Dale, has just found out he has beaten off tough competition to become the Head Coach for the North Midlands Rugby Under 18s. Dale, who has a BA in Further Adult Higher Education and a Post Graduate Certificate in Sports Coaching is currently studying towards a Master’s Degree in Sports Coaching. He has 15 years teaching experience within the Further and Higher Education sectors and was a Royal Navy Physical Training Instructor with a wide range of coaching qualifications in team and individual sports. He is also a qualified Level 3 Rugby Football Union Coach, with 20 years’ experience of coaching at national league level, including two national finals at Twickenham with Dudley Kingswinford RFC in 1999 and Bridgnorth RFC in 2015. He is currently a coach mentor at Bridgnorth RFC and Worcester Warriors Developing Player Programme Manager for Shropshire.

He added: “I really believe in harnessing the power of sport to engage with learners, ensuring they reach their potential both academically and within their chosen sport. The use of naturally occurring evidence to create the very best opportunity of meeting or even exceeding the learner target grade, is a real motivation to me. This Rugby Programme is hugely exciting, and with the range of excellent work placements on offer, alongside the additional coaching and officiating qualifications, it will benefit rugby players and clubs in the region for years to come.”