Shrewsbury Colleges Group students showed their gratitude to local war veterans at this time of remembrance with a free lunch at the College restaurant, Origins.

Last month over 40 SCG students attended the funeral of Royal Marine veteran, David McLaren Kerr, after the Royal British Legion made an appeal for people to support the funeral of the man who had outlived his only family. This moving event inspired College staff and students in Hospitality & Catering and Travel & Tourism to give back to the men and women who secured peace for their lifetime. 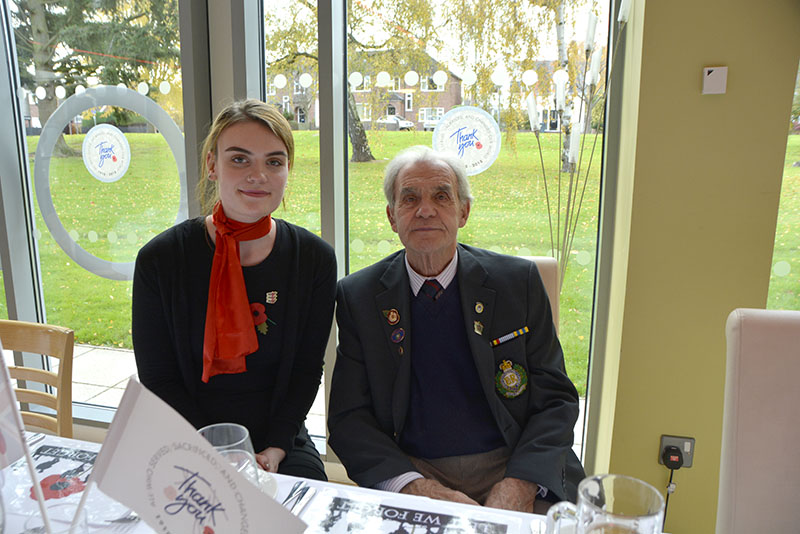 One of the Travel & Tourism students that attended the veteran’s funeral, Charlotte Taylor-Jones, 19, from Shrewsbury said: “I volunteered for this event straight away as I am so thankful to all the veterans. I was also excited to meet them and get to hear their stories. They put their lives on the line for people they didn’t know and that is inspiring – I have a lot of respect for them.”

Invitations for the special event went out to the local Royal British Legion and Armed Forces Association. Travel & Tourism students spent the morning setting up the restaurant, polishing cutlery and practising their serving skills; while Hospitality & Catering students cooked up a storm in the kitchen. The veterans ate Vegetable Soup, Braised Beef and Spotted Dick with Custard – some nostalgic dishes from years gone by. The students commented that they felt “privileged to be cooking for them”.

Post-it notes covered a wall with messages of thanks and gratitude from students, including Beverly Dela Cruz, who wrote: “A million thank yous for all the courage and bravery you have shown. I can live at ease in this world, knowing you did your part to make it a better place.”

Andy Middle, Hospitality & Catering Technician, was the brains behind this event. He is a past Shrewsbury Colleges Group student and serviceman. Andy was in the Royal Signals for 14 years and took advantage of the facilities at Origins to put on the charitable lunch. He said: “When I was a student here I did a charity breakfast for Help for Heroes and wanted to do something again now I work here. This lunch is for students to have a chance to give their thanks – Britain may be a very different place if it wasn’t for the veterans.”

David Tipton, one of the lunch attendees, served three years in the Royal Engineers and spent that time fighting in the Korean War. He commented: “I can’t believe what the students have done here today – it is fantastic!”

Peter Benford, another lunch guest, who was in service for 38 and a half years and spent the majority of that in the Armoured Cavalry Regiment, said: “An event like this is marvellous. We need more young people to join the Royal British Legion and seeing the students today and all the wonderful teenagers we’ve been speaking to whilst selling poppies this fortnight, really gives us hope.”

To find out more about courses at Shrewsbury Colleges Group call 01743 342411 or come to an Advice Event January 17.