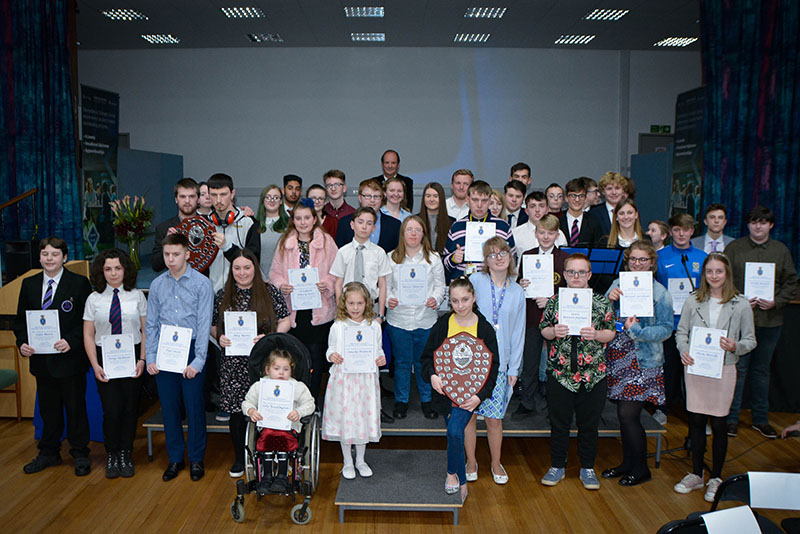 Now in its fourteenth year, the event continues to showcase the many actions carried out by young people within school and the wider community, and how they have gained the skills to cope with life’s challenges.

This year, 36 individuals and two groups from across the county were nominated by schools and youth organisations. Parents, guardians and teachers joined the nominees during the evening’s award ceremony - all those nominated received a certificate from the High Sheriff.

The High Sheriff for Shropshire, Rhoddy Swire, said: ““It is a great honour and pleasure to celebrate the exceptional achievements of those nominated. I am staggered by the depth of commitment, passion and achievement that is shown and indeed, somewhat humbled. Long may Shropshire and the Shrievalty celebrate such fantastic young people and I wish them every success in the future.

Thank you to Shrewsbury Colleges Group for helping to organise this event and thank you to everyone who put forward the nominations to bring together this exceptional group of people.”

From all the nominations two regional winners were selected: Lee Winn, who has overcome many challenges with his learning difficulties and done some great work with the YMCA, won for Telford & Wrekin and Mia Booth, who is a young carer for her mother and siblings whilst going to school and trying to have a normal childhood, won for Shropshire.

The High Sheriff commented: “It was a hard task to choose out of the 38 nominations - I was so impressed with what they had all achieved and the challenges they had faced.”

Catherine Armstrong, SCG Group Vice Principal, said: “The High Sheriff Awards evening is always a lovely event, it’s great to see and hear how much the young people of Shropshire do for their local and wider communities. I feel privileged to be part of the event and meet so many inspiring young people”

One nominee from SCG was student, Amy Harris, who was nominated by her tutor, Jenny Barker. Amy studies A Level English Language, Photography and Sociology at the English and Welsh Bridge Campuses. She was put forward for being a delightful, kind and gentle young person who supports others through a range of personal initiatives. Amy packs shoeboxes of children’s gifts and necessities to send to third world countries, sends letters to the isolated elderly, works with the local homeless community and raises money for dementia patients. Her biggest venture is ‘Project Sunshine Smiles’ – Amy leaves anonymous well-being notes, with positive messages, around Shrewsbury to brighten a strangers day.

Amy said: “Sometimes people need to be cheered up and a kind note can go a long way - I have done over 1000 so far. It was nice to be nominated for the High Sheriff Awards – Jenny is very encouraging and she really respects the work I’m doing. I hope to eventually work with children and inspire the next generation to be kind and thoughtful.”