Students perform the one that you want – Grease the Musical

Students from all three campuses are members of MaDA, Shrewsbury Colleges Group’s enrichment program for Music and Dramatic Arts. They have been working hard at rehearsals to get ready for their performance in Wakeman Hall next week. The famous musical, which is narrated using the songs we all know and love, will be performed from March 27 to 29 (Weds to Fri). 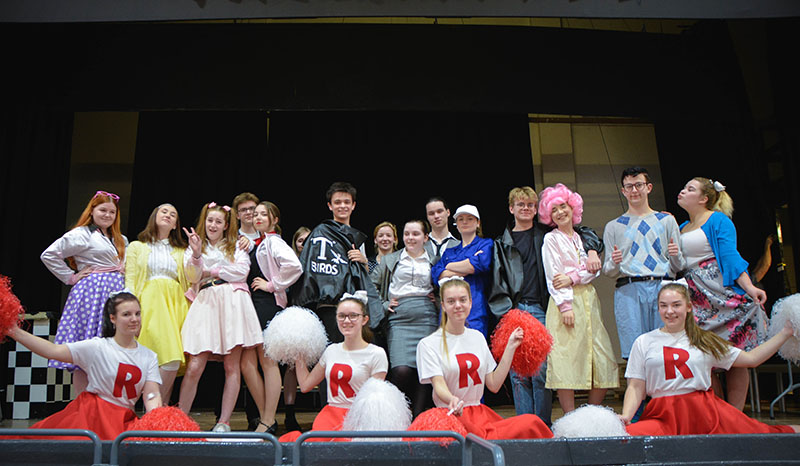 The technical support and scoring will be provided by the students, with 8 of them making up the live orchestra. Two current student and two former students will also be helping with the sound and lighting and a selection of students have spent their spare time choreographing some of the dance.

Grease is a 1950s high school love story full of hit songs like: ‘Greased Lightnin’’, ‘We go Together’ and ‘Summer Nights’. There’s hub-cap-stealing, hot-rod-loving boys in leather jackets that are kept on their toes by wise-cracking girls in teased curls, bobby sox and pedal pushers in a salute to early rock and roll. At the heart of the story is the romance between rebellious greaser, Danny Zuko and the sweet new girl in town, Sandy Dumbrowski. They fall in love over the Summer, but now, back at school with peer-pressure and cliques, their love becomes a bit more complicated. Can Danny maintain his cool-dude status and still make wholesome Sandy his girl?

Jenny Andrews, Community Arts Co-ordinator at the College and Director of the show said: “The students have worked so hard during rehearsals and have gone above and beyond top bring the show to life. These performances are such a great way for them to gain experience and have fun at the same time. They are so excited to perform to family, friends and the public – the College is very proud. The show will be amazing and it should not be missed – tickets are selling out fast!”

Daniel Fleet, from Minsterley, is currently studying Level 3 Performing Arts and recently completed his Film, Music and Drama A Levels. He is playing the resident tough-guy, Kenickie and has said: “I was always a part of MaDA when I studied A Levels and wanted to carry that on when I went over to vocational. The cast are such a talented bunch and everyone suits their part really well. The whole performance translates well and we can’t wait for people to see it.”

Lara Good, a Level 3 Performing Arts student, from Newport, is playing the lead role of Sandy: “I have never had a lead role before and promised Jenny I would work hard on it if she gave me the part. It is so nice that all three campuses are involved and working together to create this performance – I am making so many new friends that I wouldn’t normally when I’m at the London Road Campus. This is such an iconic musical to do – everyone knows it and that makes it both daunting and exciting for all of us. Everyone who is performing in it or comes to watch it has a connection with Grease in some way.”

The performances will be at the English Bridge Campus from 27-29 March at 7.30pm. Adult tickets are £10 and concession tickets are £7.50, which you can buy at www.shrews.co/grease