Seven SCG students from across the county get Oxbridge offers

Seven Shrewsbury Colleges Group students have been offered places to study at the prestigious Oxford and Cambridge Universities.

The students, who hail from all across the county, are currently studying A Levels at the colleges’ English Bridge and Welsh Bridge Campuses and will take their exams this summer before heading off to study at Oxford or Cambridge. 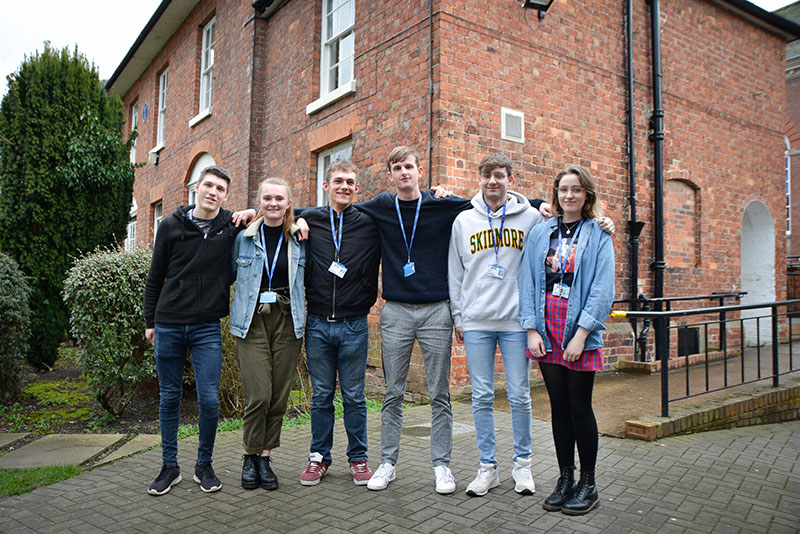 The successful students have offers to read a broad range of subjects, including Mathematics, Music, Physics, History of Art, Engineering and Languages.

The two students offered places at Oxford Colleges are:

Jessica Halliday, 17, from Craven Arms, previously of Church Stretton School. She is studying History, Fine Art, English Literature and Maths and has been offered a place at St John’s College to read History of Art. Jessica said: “My Art teacher really supported me in my applications, advising me of texts and documentaries to study which would help me in my preparation for interview. He also spent hours checking my personal statement and discussing interview questions with me.”

Robin Huber, 19, from Shrewsbury, previously of Shrewsbury School. She is currently studying Chemistry, Music and Biology and has been offered a place at Queen’s College to read Music.

The five students offered places at Cambridge Colleges are:

Rose Barnes, 18, of Dorrington, previously of Adcote School. She is studying Maths, Further Maths, Chemistry and Physics and has been offered a place a Jesus College to read Mathematics. Rose said: “It was such a relief when I got the offer and I knew the hard work had paid off. I need to really focus on getting the grades, but there’s a nice light at the end of the tunnel now.”

Brad Jones, 18, from Broseley, previously of William Brookes School. He is studying Politics, French, German and History. He has been offered a place at Christ’s College to read Modern and Medieval Language. Brad said: “My Language teachers were really helpful with practice interviews - I felt so prepared when I went to the real thing. After university I would like to enter the Diplomatic Service or work in College Admissions in the USA.”

Heath Pearson, 18, of Shrewsbury, previously of Meole Brace School. He is studying Maths, Further Maths, French and Physics. He has been offered a place at Corpos Christi College to read Mathematics. Heath said: “I felt well prepared going into the interview. My Maths teacher gave me really useful advice and I also read several beneficial books, including: ‘How to think like a Mathematician: A Companion to Undergraduate Mathematics’.”

Brody Wooding, 18, of Market Drayton, previously of Grove School. He is studying Physics, Chemistry, Maths and Further Maths. He has been offered a place at Downing College to read Physics. Brody said: “The Agency at College offered some amazing opportunities to help with my application, like the Physics placement week.”

Leo Maden, 17, of Telford, previously of Charlton School. She is studying Maths, Further Maths, Computer Science and Physics. He has been offered a place at King’s College to read Engineering.

Principal and CEO, James Staniforth said: “I am delighted for all seven students that their hard-work, intellect and enthusiasm for learning has been recognised and that they have been made offers by their respective Oxford and Cambridge colleges. The support they have received from their teachers, student support tutors and other members of the College student services team clearly made a difference to students. I am also delighted that this is further evidence that whatever your ambition you can achieve it through Shrewsbury Colleges Group. The students all know that they now have to achieve their offer grades, but they are all well-placed to do so – the Department for Education performance tables published earlier this term confirmed that our students make outstanding progress, surpassing independent and grammar schools in the county. I am therefore confident that the combination of these students’ hard-work and excellent teaching and support will see them taking up their places at Cambridge and Oxford in the autumn.”

To find out more about courses at Shrewsbury Colleges Group call 01743 342333 or come to the Advice Event on April 4.