Music Technology students hit all the right notes with The Verve

Music Technology students at Shrewsbury Colleges Group were rewarded for their efforts at their annual awards ceremony on Thursday - with one scooping the main accolade, named after former Charlatans’ drummer, the late Jon Brookes.

The Jon Brookes Award for Endeavour was established after Mr Brookes, former drummer with world-renowned British Indie band The Charlatans, became affiliated with the College when he helped to launch its Roland Academy for Music in 2009. 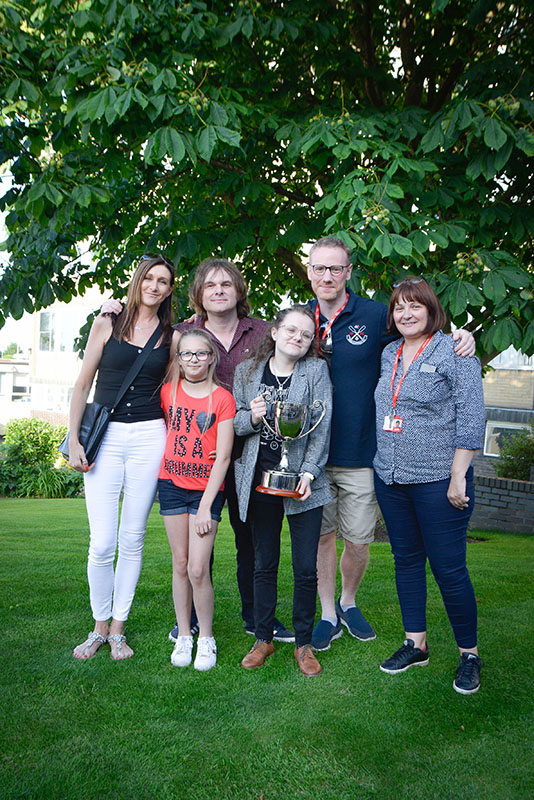 In late 2013, Jon passed away from a brain tumour – but his legacy through the College lives on. The Verve guitarist, Nick McCabe, a band that have worked closely with The Charlatans, was the special guest for the evening and presented the trophy to Music Technology student, Kate Rainford. Deborah Hill-Brookes, Jon’s wife and his daughter, Coco Brookes, were also there to pass on their congratulations and continue his legacy with the College.

Nick said: “I feel privileged to be here reflecting on the student’s successes this year. It is so inspiring to see the journeys that they’ve been on. I only met Jon a handful of times, but instantly recognised him as one of the good guys who was always so supportive. It is an honour that I can present this award on his behalf.

“Kate is a very deserving winner as she has persevered through her struggles and that is something, as a musician, I can really relate to.”

Kate, 18, from Shrewsbury said: “I am so surprised that I got this trophy – I didn’t believe it when they called out my name. This award isn’t just for me, it’s also for all the people who believed in me. This time last year I wouldn’t even leave my bedroom and family, friends and teachers have helped me get where I am today.”

Other awards and prizes were handed out to students who had worked hard during the academic year, including Sam Potter, from Hodnet, Charlie Braddick, from Newtown and Alex Caswell, from Shrewsbury being recognised for going above and beyond. There was a variety of music performances from students for friends and family to enjoy throughout the evening.

Music Technology teacher, Beth McGowan said: “It was a very special evening celebrating the students and Nick made a very inspiring speech to the students. Thanks to Nick for taking the time to do this.”