Two teams of engineering apprentices from Shrewsbury Colleges Group have been crowned the best in the UK after designing and building a remote-control crane from scratch. The two teams were two of only six selected from regional heats across Great Britain to make it to the Worldskills UK finals at the NEC. 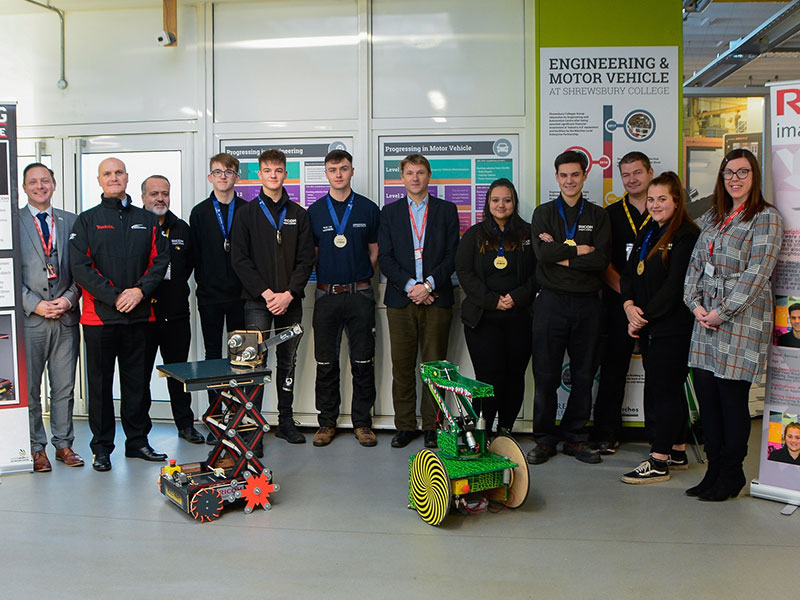 The National finals took place at the end of November at the NEC, Birmingham. The team had to design and build their remote controlled crane from scratch under the watchful eyes of judges.

They were also be given further surprise team challenges that involved manual turning, Fabrication and Welding and Electronics.

Belinda Nightingale, from Telford, Chloe Millington, from Bridgnorth and Tom Mills, from Shrewsbury, all 20 and Ricoh UK Products Ltd apprentices, formed one of the teams and won Gold in the Manufacturing Team Challenge.

The other was made up of Ryan Lee, 22 from Donnington, Harry Maddox, 19 from Newport and Tom Moule 19, from Telford and they won silver in the same challenge.

The second team was a ‘cross company collaboration’, with Ryan an apprentice with Makita Manufacturing Europe Ltd and Harry and Tom who are also with Ricoh UK Products Ltd and they won Silver in the same competition, narrowly missing out on joint Gold by 0.15 marks over the 3 days of competition. Both teams have now have made it into the ‘Team Great Britain squad’ to represent Great Britain in the International Worldskills Finals in Shanghai in 2021.

Claire Shepherd, Learning and Development Officer at Ricoh, said: “Ricoh UK Products Ltd are delighted that our team won Gold. It’s an extremely tough competition but the team pulled out all the stops to win the title, and in the run up to the competition final put so much effort and commitment into their projects. The win was very well deserved, and testament to the dedication of our apprentices!”

Richard Annett, General Manager at Makita, said: “Ryan Lee joined that programme with Makita a year ago and we have seen him evolve into a young enthusiastic and capable Junior Engineer. He is certainly one of our shining stars and we are looking forward to his future development and long and fruitful career here at Makita.

“His growth has occurred first and foremost through his own efforts but has been assisted heavily by support and education provided by Shrewsbury Colleges Group.
The wins follow student success in June, where students studying Engineering Foundation Degrees at SCG, competed at Staffordshire Universities GradEx19 show, where they scooped First, second and third in their engineering categories for the second year in a row!

Andrew Lee, Engineering Curriculum Leader, said: “I am extremely proud of all our students and apprentices in Engineering. Those that have gone onto collect the awards and reach finals in competitions, is evidence that our apprentices and students are some of the best in the country.

“This isn’t just down to the individual’s hard work in reaching such a high level, but also the support provided to ensure they can thrive from their employers, mentors and the staff in the Engineering team here at SCG.”

In 2017 SCG secured nearly £500,000 from the Marches Local Enterprise Partnership (LEP) via its Growth Deal with Government and some of this equipment has been instrumental in training these medal winners.

“The engineering hub at Shrewsbury Colleges Group was one of three created across the Marches following our call for employers to work with training providers to develop programmes which really address the skills issues facing our manufacturing and engineering businesses.

“It is heart-warming to hear of these future engineers doing so well via their college training and on-site Apprenticeships with employers. We are delighted that they have done so well in this national competition.”