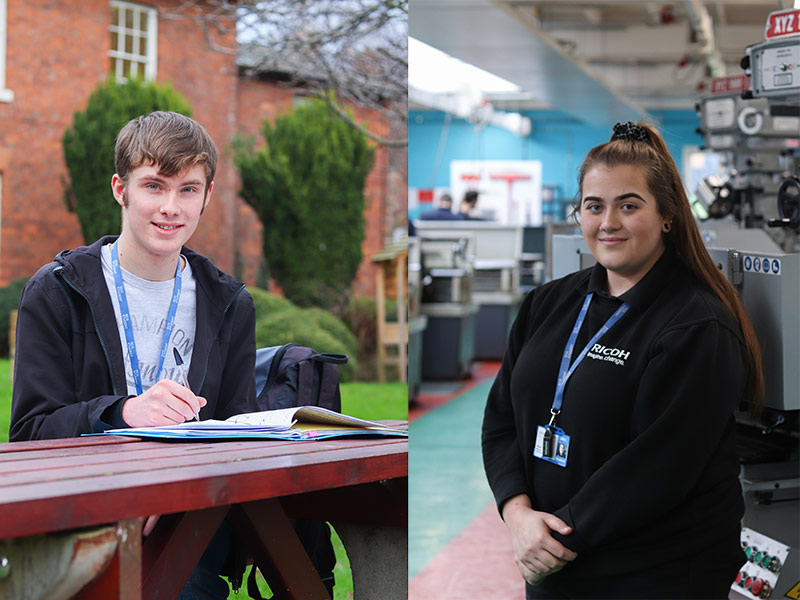 Two students from Bridgnorth studying at Shrewsbury Colleges Group are taking different paths and excelling in their fields.

And 17-year-old Daniel Bowen is celebrating after receiving an offer to study at the prestigious Oxford University.

As well as excelling in her Apprenticeship, Chloe was part of the College’s Gold WorldSkills winning engineering team and is only one of two females to make it into the UK squad.

Chloe was originally studying A Levels, but her experience with using machinery in Design made her inspired to take a more hands-on approach and she swapped onto an Apprenticeship at Shrewsbury Colleges Group after impressing bosses at Ricoh.

In November, Chloe was on one of two SCG winning teams of engineering apprentices to have been crowned the ‘best in the UK’ after designing and building a remote-controlled crane from scratch.

The two teams were two of only six selected from regional heats across Great Britain to make it to the WorldSkills UK finals at the NEC.

The National finals took place at the end of November and Chloe and her teammates won Gold in the Manufacturing Team Challenge.

Both teams have now made it into the ‘Team Great Britain squad’ to represent Great Britain in the International WorldSkills Finals in Shanghai in 2021.

Chloe said: “I was shocked that we won gold. We didn’t think we had done as well as we did. I chose to do an Apprenticeship because I wanted to earn as I learn and not get into debt. I’m looking at going into the tool room doing machining jobs at Ricoh.

“Shrewsbury College has been really supportive and given us the chance to take part in night-time learning in our spare time to help us improve our opportunities.

“I chose product design at A Level and doing that meant I got a chance to go on a few machines and I loved it, so I started looking into Apprenticeships and I think it’s a good route for me to go down.”

Claire Shepherd, Learning and Development Officer at Ricoh, said: “Ricoh UK Products Ltd are delighted that our team won Gold. It’s an extremely tough competition but the team pulled out all the stops to win the title, and in the run-up to the competition, final put so much effort and commitment into their projects. The win was very well deserved, and a testament to the dedication of our apprentices!

“Chloe is excelling in her apprenticeship and we are delighted that she wants to stay on with us and move up the ladder while gaining new skills. We are sure she has a great future in engineering ahead of her.”

Daniel Bowen, from Oldbury Wells School, is studying Biology, Chemistry, Geology A Levels at SCG and is one of six students to have been offered a place at either Oxford or Cambridge Universities.

Daniel said he set himself the challenge to see if he could get an offer at Oxford and he has succeeded!

He said: “I learnt more about Oxford when I came to College and started attending MedSoc, the SCG Medical Society supports students making high level medical and related applications to universities. It gave me the inspiration to push for it.”

“Only starting at this College made me think I could go. The Agency team and teachers have been a great support. I gave my personal statement to all my teachers so they could check over it and give me advice.

“I sent an open application to study Biology and had an offer come back to study at St Hilda’s College. I know my career will be in biological sciences but I am undecided which branch I will go into at this stage.”

“Oxford have invited me for an Applicant Open Day in February and I will experience a taster of my course.”