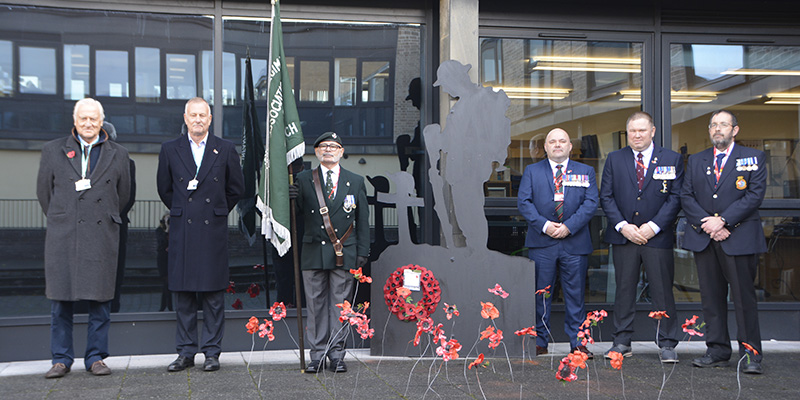 To mark Remembrance Day 2021, the college held a veterans’ lunch and remembrance services for students and staff across all campuses.

After social distancing meant that last year’s remembrance services needed to be recorded for students and staff to participate, a return to in-person events was possible this year, allowing Shrewsbury Colleges Group to fully mark the occasion as a community.

Earlier in the week, a lunch took place for Royal British Legion veterans and Poppy Appeal volunteers in Origins restaurant (which was decorated with flags and poppies for the occasion). The lunch was partly organised through the hard work of our Travel & Tourism students, who willingly gave up their time as their way of thanking local veterans and supporting Remembrance Day fundraising efforts.

Kevin Dempsey, Chairman of the Shrewsbury Royal British Legion, acknowledged the special appeal of SCG’s veterans’ lunch, saying: “We are overwhelmed by invitations to different events, which is wonderful, but we really enjoy coming to this event as we love the interaction we can have with the students.”

The attendees were all eager to encourage more schools and young people to get involved with the Poppy Appeal. Susan Coleman, the local Volunteer Deputy Poppy Appeal Organiser, explained that: “In 2021, we have had 45 volunteers around the local area collecting for the Poppy Appeal over the last two weeks. Our volunteers range in age from police and army cadets to an 86 year old gentleman who gives his time freely every year, but we are always looking for more! The Poppy Appeal makes around £50 million annually; however, this is only half of what the Royal British Legion needs to support veterans.”

Heather Francis, President of the Shrewsbury Royal British Legion, thanked Shrewsbury Colleges Group for organising the event: “It’s very important that the work of the volunteers collecting in the shops and schools of our local area for the Poppy Appeal is recognised.” 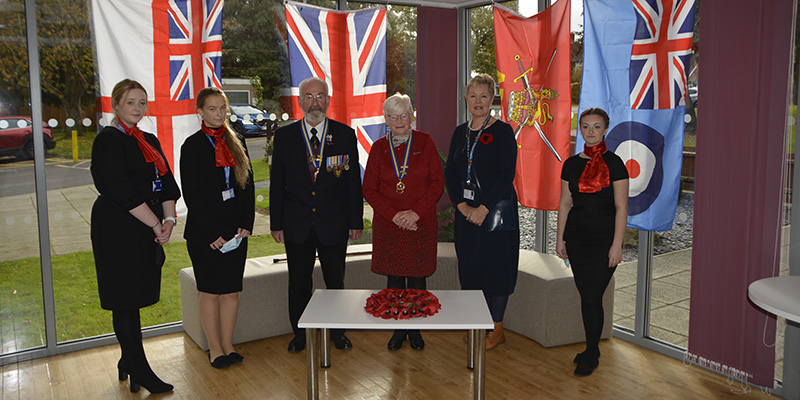 On the 11 November itself, remembrance services were held across all college campuses. Veteran members of staff told students the story of the first unknown soldier to mark the 100th anniversary of the historical event. Afterwards, there were readings by students, a two-minute silence and the last post. To end the service, a small group of students sang ‘Somewhere Over the Rainbow’.

Ted Coxon, who organised the Remembrance Day services, said: “I served in the infantry for 25 years and the army and the college is all I have really known in my work life. During my time in the army, I have lost lots of friends and comrades to acts of war or terror. As with every veteran, this time of year is extremely poignant and sad, but letting the students know that there are veterans in the college community is important.”

He emphasised how meaningful it is to those who have been in the armed forces that SCG students do turn out to remembrance services, demonstrating that they are still interested and still want to remember.