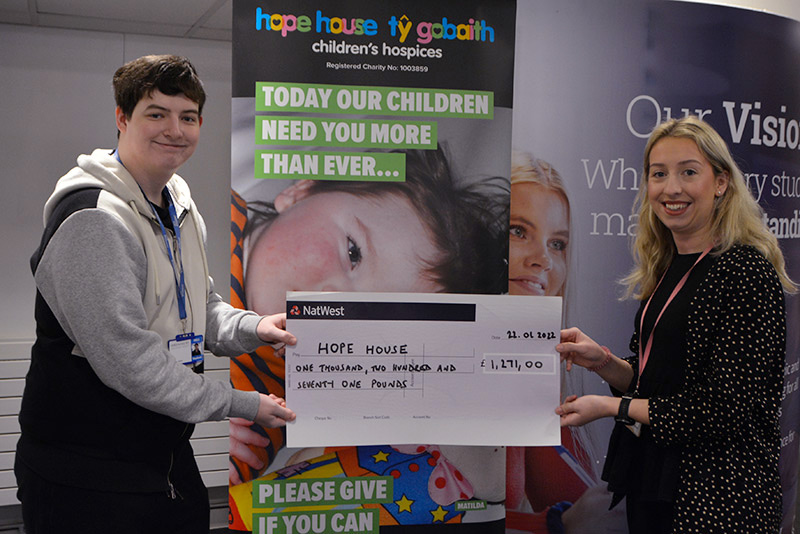 A team of Shrewsbury Colleges Group Business students have raised an impressive £1,271 for charity as part of their course, overcoming the challenges of fundraising under COVID restrictions.

Last summer, our Level 3 Extended Diploma in Business students organised events in aid of a charity of their choice.

The group fundraising for Hope House had originally hoped to host a curry night, but their plans had to drastically change after COVID restrictions meant that all the events needed to be moved online.

Although running a successful online event presented many challenges, including limiting their options for activities, the group still wanted to do something fun. They decided on a cake decorating contest. The idea was the perfect combination of being a great organisational challenge for the students and a genuinely fun activity for their audience.

The event went very well; everyone who joined in really enjoyed it and a winner was chosen for the best cake decoration. Everyone who attended gave a donation, which contributed to the final thousand-pound sum.

However, the group were determined to raise as much money as possible and they knew that cake decorating wasn’t going to be as lucrative as they wanted.

Team leader, Dan Gough, 18, anticipating the fundraising limitations of cake decorating, suggested an online auction to run alongside their main event. After asking for donations from friends and colleagues of their parents, the students secured an impressive collection of items to auction, including festival tickets, football shirts and a signed book.

The auction did present some difficult obstacles since COVID restrictions delayed some of the auctioned items getting delivered to the buyers, but that did not stop the students from raising an incredible £1,271.

The group were extremely proud of their effort and the project was such a success that Dan has been inspired to pursue Business at a higher level as an HND course. He said: “A special thank you to all those who donated money and the items for auction. I hope the money raised will make a difference for Hope House in what has been a really hard two years for all charities.”

The group considered a few charities but ended up choosing Hope House (who provide care and support to life-limited children) because the charity was close to one member’s heart.

Bekki Fardoe, Area Fundraiser for Hope House, visited SCG in January 2022 so Dan could present her with the cheque. Bekki said: “We are so grateful to Dan for choosing to support Hope House Children’s Hospices with his charity event as part of his business studies and raising a fantastic £1,271!”

“We rely heavily on the support of our community to ensure we can continue to provide care for local, seriously ill children, so it is fantastic to see Shrewsbury Colleges Group encouraging students to fundraise for charities. £1,271 will provide a full day’s respite care for one child at Hope House so Dan’s efforts have made such a difference. Thank you.”