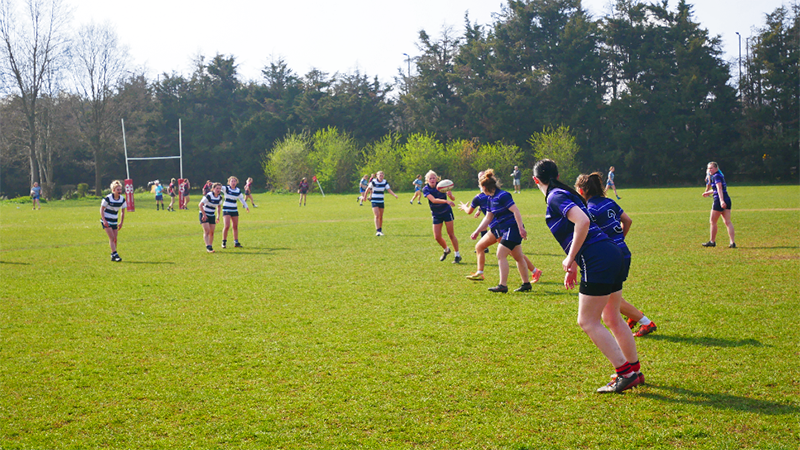 On Friday 25 March, SCG’s Women’s Rugby team competed in the Rosslyn Park Sevens, the largest rugby tournament for schools in the world.

The competition is a brilliant celebration of rugby that is prestigious enough to attract international teams, with schools from Belgium, France and Sweden being present at this year’s event. 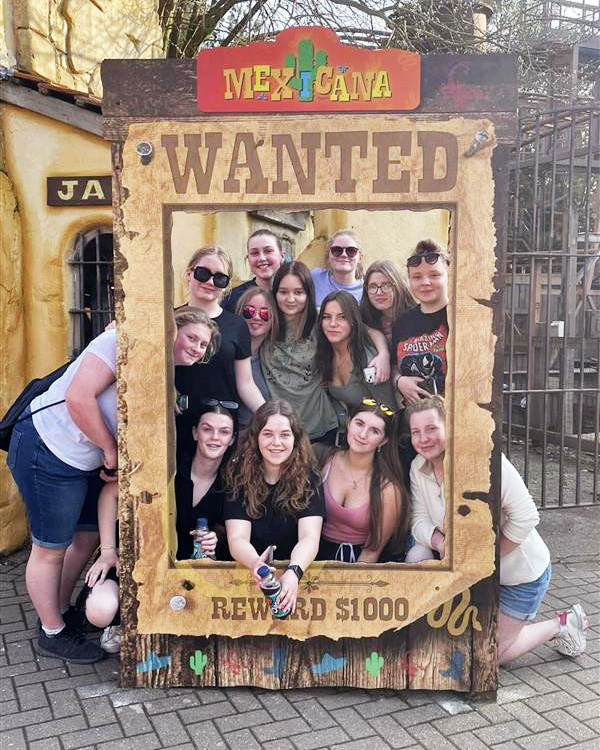 The day before the tournament, SCG’s team arrived at their accommodation, which was based at Chessington World of Adventures. The students had organised entry to the theme park for themselves, where they spent the afternoon building team spirit and enjoying the good weather, before returning to their rooms to prepare for the following day.

The competition was on a scale that many of the girls had never experienced before, as there were well over 1000 students on site and 24 games of rugby happening at any one time.

The SCG team played their first pool game against Sir William Borlase’s Grammar School. During the game, the team were a little nervous and felt like they missed a couple of opportunities that they would have normally taken. However, despite starting off on shaky footing, they won the game 19-5.

Their second pool game was against Epsom College, one of the local teams, who had brought about 100 supporters to watch. SCG’s team got the first score, but Epsom came back strong and led most of the game 12-10.

It looked like it would end that way after SCG’s captain and flyhalf, Izzy McGuire, ran into the back of the scrumhalf’s head. She ended up with a very bloody nose and a Head Injury Assessment, which meant she would miss the end of the game. Earlier this year, Izzy was selected for the Centre of Excellence squad at Worcester Warriors (one of the regional centres from which the England under-18s team is selected), so her absence was a significant blow to the team.

However, the team rallied well. On the last play of the game, they went through several phases of prolonging the half by three minutes until they finally crossed the line and finished the game with a 15-12 victory.

Despite this second victory resulting in the excellent achievement of qualifying for the top non-dice programme competition, it also meant that the players had to face the B-side from Hartpury College, one of the most famous school rugby teams in the country.

SCG’s team were overwhelmed by the reputation of the opposition and struggled to get themselves in the right frame of mind. The game started off poorly, with the team letting in three easy tries in five minutes. All three of these tries converted meant that they were down 21-0. To make things worse, SCG then lost another player to a knee injury. Hartpury got another two tries before half-time, taking the score up to 35-0 in their favour.

At half-time, Izzy felt well enough to come back onto the pitch, and she tried to rally the team. Her enthusiasm helped lead to a monumental effort in the second half.

Izzy, Sarah Price and Katie Smith all put in superb performances to get two tries, which resulted in Hartpury only outscoring SCG by three points in the second half, with a score of 13-10. Sarah, in particular, put in an incredible effort to get her try, carrying three of the opposition’s players about five metres on her back before she got across the line to score.

Simon Wait, Sports Teacher and the team’s coach, was really pleased with the players’ performances and attitudes. He said: “All in all, it was a great experience. The girls were able to see that they had done amazingly well to make the cup competition. Although the plate or the bowl competitions (in which they would have competed if they had lost one or two group games) would have perhaps provided more equally matched games, we wouldn’t have made the last 16 out of the 54 teams in the competition.”